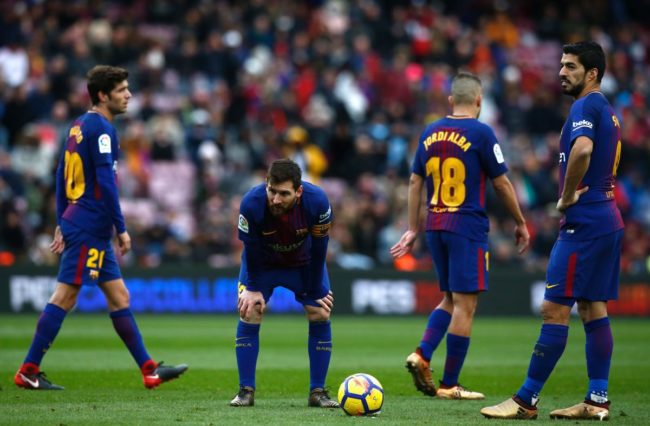 Barca have now lost their first two Champions League group stage games this season and the disappointing defeat will do little to appease the growing section of Barca fans who want to see Koeman sacked.

Nunez’s first ever Champions League goal put Benfica into a lead early on (3′) before Silva got a second in the 69th minute.

The Uruguayan forward then compounded Barcelona’s misery from the spot after VAR picked up on a handball from Sergino Dest in the box.

The result means Barcelona are bottom of Group E on -6 goal difference and four points off second-placed Benfica with four group games to go.

Barca got off to a disastrous start with Nunez giving Benfica the lead just past the two minute mark. Nunez picked the ball up on the left flank, easily jinked past Eric Garcia and smashed his low drive into the bottom corner beyond the helpless Marc-Andre ter Stegen.

With the visitors shell-shocked, Benfica could have gone further ahead two minutes later, but Roman Yaremchuk’s one-on-one effort was denied by Ter Stegen who matched the low strike.

In a scrappy first half, which saw Gerard Pique subbed off for 17-year-old Gavi as he looked destined to pick up a second yellow, Barcelona’s best chance to equalise came to Frenkie de Jong, but he hit his first-time shot wide at the near post.

Benfica should have doubled their lead in the 53rd minute. Ter Stegen made the bizarre decision to sweep up a long pass which Nunez comfortably got to ahead of him, but with the goal gaping his strike came off the post.

Benfica did extend their lead, though, and it was Rafa who provided the finishing touch. Joao Mario’s shot from lose range was parried by Ter Stegen into the path of the Portuguese forward, who used the outside of his right foot to turn the ball home.

The night did get even worse for Koeman’s inexperienced side, who did not register a shot on target all evening, when Sergino Dest left up a flailing right arm inside the penalty box.

It went to VAR, the spot-kick was awarded and Nunez tucked the ball into the bottom corner to ensure it would be a nightmare evening for Barca’s Dutch boss.

Somehow the night took an even worse turn for Barcelona in the final moments as Garcia was shown a second yellow in the 87th minute.