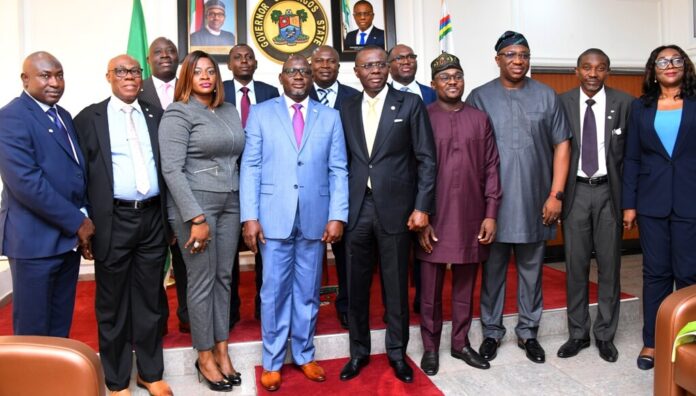 The Lagos State Government has reiterated that there is currently no multiple taxation in Lagos State revenue system.
Governor Babajide Sanwo-Olu stated this during a courtesy visit to Lagos House, Ikeja by the Executive Chairman, Federal Inland Revenue Service, Muhammad Nami.
Placing emphasis on startups, the Governor stated that his administration will always improve on the ease of doing business in the State rather than stifle the economy with loaded taxes.
Sanwo-Olu promised to embrace and support the activities of start-ups who are scared of the tax burden associated with businesses.
He also urged Nigerians to pay their taxes regularly in order for the Government to attain a balanced development at all levels, which, according to him, include social infrastructure and security.
The Governor promised that the Lagos State Government would continue with the existing relationship and further collaborate with the FIRS in sharing information to aid revenue collection and ensure deliverables were met.
Sanwo-Olu lauded the Federal Government for considering start up businesses in the exemption threshold on taxation.
His said: “We will make sure that there is ease of doing businesses, especially start-ups, that are always scared that they have multiple taxation.
“There is nothing like multiple taxation in Lagos.
“It is clear that they are exempted, but that doesn’t stop them from doing proper filing and ensure transparent reporting at whichever level of their business.
“We will also use this opportunity to encourage our citizens that it is only when they play their own part as responsible citizens both at the corporate and individual levels that the government can come up and discharge its responsibilities.
“Development is by tax and it is only when we collect reasonably amount of tax that we can introduce development both at infrastructure level and more importantly on security so we cannot but ensure that we collaborate and corporate with you,” he said.
Responding to the Chairman on the N8.5 trillion target set by President Muhammadu Buhari, Governor Sanwo-Olu said the country has the capacity to generate such amount but warned that it must be done cautiously.
Also speaking on the ongoing Federal Account Allocation Committee 2020 meeting holding for the first time in Lagos, Sanwo-Olu said it was an opportunity to deliberate on how the proceeds that State gets from the Federal Government can be used judiciously.
He said: “I am sure they know clearly that you can live up to those billings and N8.5 trillion sounds a lot but they know you have the capacity.”
Nami said the aim of the visit was to ensure effective performance of the service in meeting its target and in its request to share information, collaborate in building capacity as well as engage private sector on the Value Added Tax collection.
“We feel without this collaboration, we cannot generate this N8.5 trillion that we have been mandated by the President to generate,” he said.