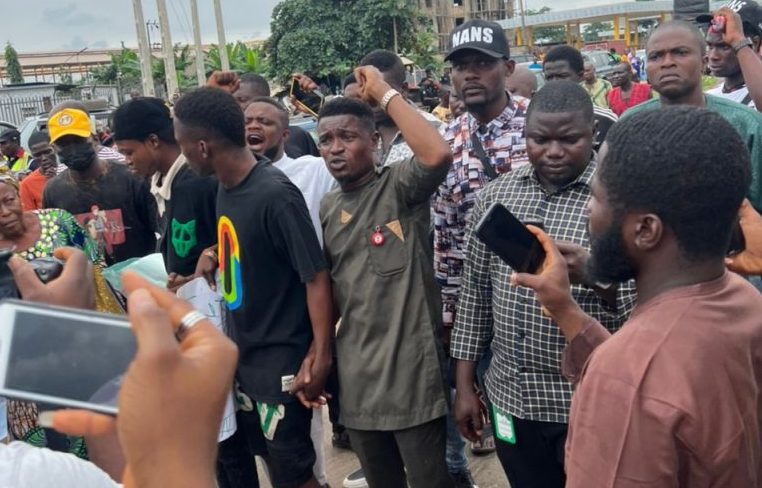 The National Association of Nigerian Students (NANS) on Tuesday said its members in the nation’s tertiary institutions would continue to occupy major highways in protest against the ongoing nationwide strike by the Academic Staff Union of Universities (ASUU).

They spoke one after the other at Sagamu interchange on Lagos-Ibadan Expressway during their protest against the ongoing strike by the Academic Staff Union of Universities (ASUU).

The News Agency of Nigeria (NAN) reports that the students had on Tuesday morning blocked the Lagos-Ibadan Expressway, protesting against the ongoing strike by the Academic Staff Union of Universities (ASUU).

NAN reports that the students in their hundreds, demanded the immediate end to the strike, which had entered its seventh month.

The situation left many motorists plying the road stranded with their passengers.

All entreaties to the aggrieved students by motorists and commuters did not yield any result as NANS members insisted that they would not leave the road until their demands were met by the Federal Government.

Addressing journalists at the scene, Mr Afeez Akinteye, the National Vice-President, NANS External Affairs, said: “Our demand is not new; it is for the government to end the ASUU strike now.

“We have had enough of this. We started the protest today; we will continue until the strike is called off.

“We don’t want to know how they will do it, because government has the money and the power.

“We are just interested in going back to the classrooms, they should fund education and end the ASUU strike.

“With the new leadership of NANS, it is not going to be business as usual,” Akinteye said.

He said the protest would be continuous, adding that students were ready to give it all it takes to go back to the classrooms.

“We have packed our loads from our homes and we are now ready for this struggle until the strike is called off.

“Over 500 of us from various universities nationwide are staging this protest, saying ‘End ASUU strike permanently,” Akinteye said.

Also, Mr Elvis Ekundina, the NANS Deputy Senate President, said that students would continue to block all the federal roads until the government resolve the issues with ASUU.

Ekundina said that quick action should be taken to enable the students to return to the classrooms, saying that they were most affected with the current faceoff between the Federal Government and ASUU.

Commenting, Mr Damilola Simeon, a NANS member, said that students were in support of proper funding of the nation’s educational sector.

Simeon appealed to the Federal Government to pay all the outstanding arrears and salaries of the lecturers.

”We are not in support of the policy of ‘No Work No Pay,” he said.

“FRSC in Ogun wishes to inform the motoring public on the ongoing protest on Lagos-Ibadan Expressway, around Sagamu interchange down to Makun City.

“Motorists are advised to use alternative routes to avoid unnecessary delays based on the issue on ground.

“FRSC operatives and other sister organisations are fully on ground managing the situation,” he said.

Some of the motorists who spoke to NAN expressed displeasure over the situation, saying that the action had led to a heavy gridlock on the expressway.