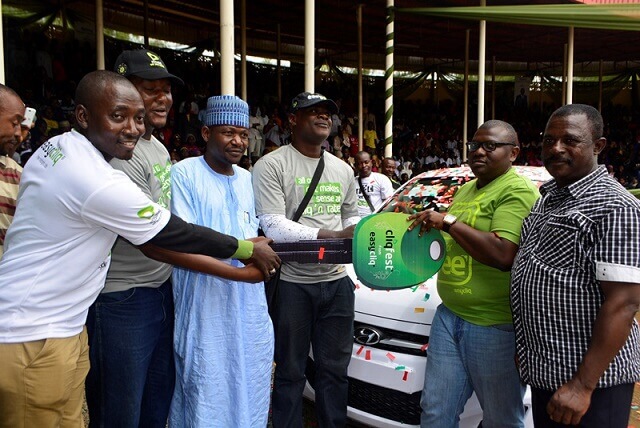 A 400 level student in the department of Modern European Languages, Uthman Danfodio University, Sokoto, Chijoke Osinachi, has emerged the winner of a Hyundai i10 car at the recently concluded Etisalat CliqFest nationwide campus tour.
Chijoke Osinachi was selected from a raffle draw supervised by renowned motivational speaker, Niyi Adesanya, the University’s Dean of Students’ Affairs, Prof A.A. Aleiro and winner, Nigerian Idol 2015, K-Peace whose real name is Olakunle Ogunrombi.
An elated Chijoke who was lost in the moment after receiving the keys to the car from the University’s Dean of Students’ Affairs, Prof. Adamu A. Aleiro could not hide his feelings as he eulogised the telecoms operator for its efforts in giving meaning to the lives of the members of society. “It is hard to describe this feeling that just in a moment things have actually turned around for me. I could not have imagined this when I woke up this morning. I am very grateful to Etisalat for this big lift.”
Also speaking at the Presentation ceremony, Etisalat Nigeria’s Manager, Youth Segment, Idiareno Atimomo, assured the school of the company’s continuous commitment to helping Nigerians through its bouquet of customer-centric products, offerings and programmes.
Beside the grand prize winner, eight other students who also went home with different prizes include Fatima Aliyu and Baba Muhammad, both of whom won Laptops; Maryam T. Umar and Agboola Ridwan, both won handsets and Jerseys each; and the quartet of Habibu Tanko, Suleiman Usman, Ibrahim Tahir and Fatima Mustafa won handsets and Flash drives each.
Speaking earlier while receiving the Etisalat CliqFest team to the University, the Dean, Students’ Affairs, Professor Adamu A. Aleiro commended Etisalat for the initiative and the choice of the School as host of the event. He also pledged support and continued cooperation of the school with the Telco on projects that would impact the students and the extended community.
Motivational Speaker, Niyi Adesanya also dished out nuggets on succeeding both in school and in the labour market, while Nigerian Idol Season 4 and 5 Winners; Evelle Zibili and K-Peace entertained the students with various performances.
Etisalat Cliqfest is an annual nationwide youth-centric education and entertainment initiative sponsored by Nigeria’s leading innovative telecommunications company, Etisalat. It features a line of youth-centred activities ranging from entertainment to multi-dimensional seminars and talks as well as sports