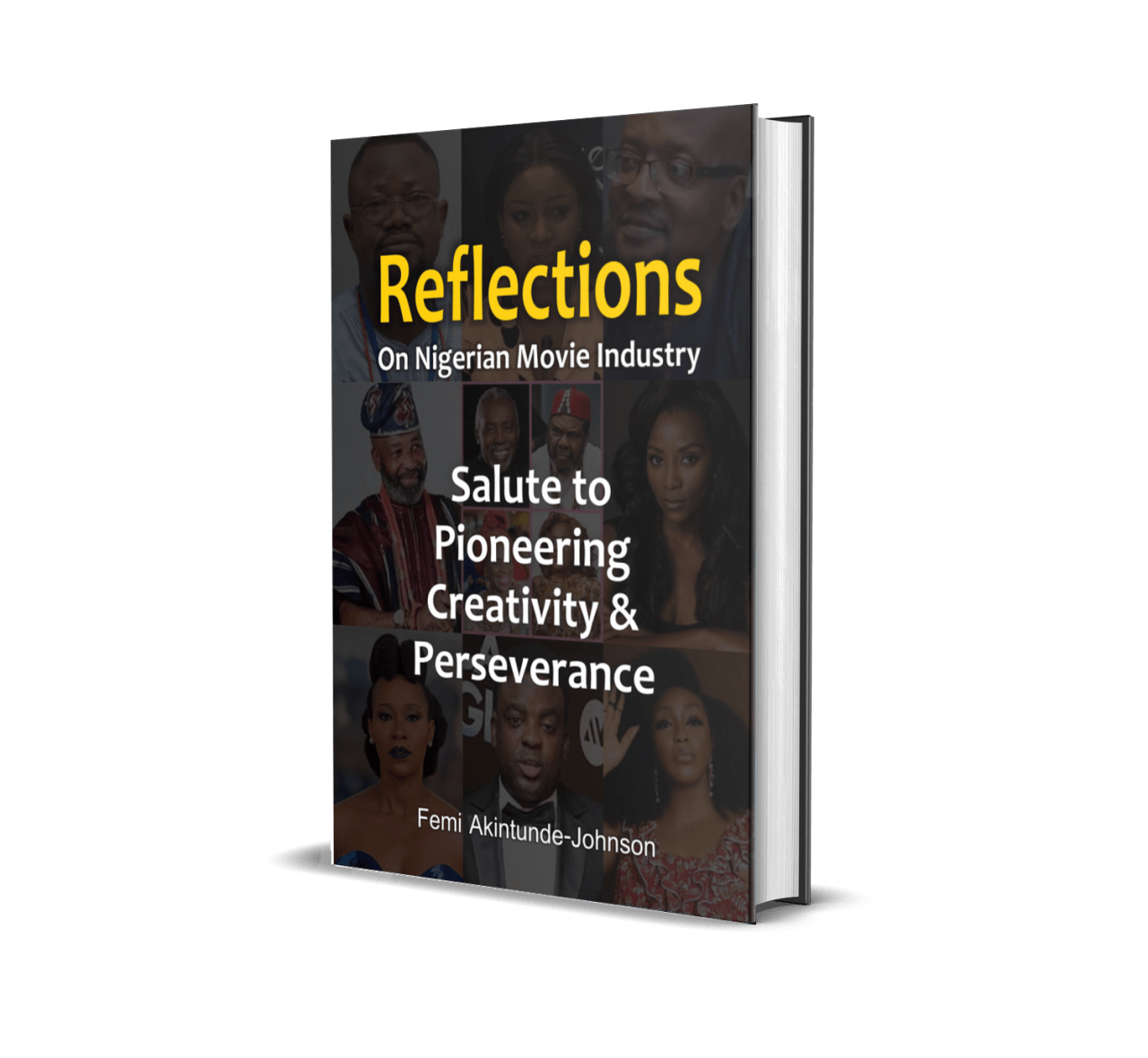 Movie-making in Nigeria, a story already long and winding, is nevertheless young and evolving. Like the proverbial elephant in the grip of blind men, perspective impacts and shifts the narrative, dependent on who may be the storyteller. Thankfully, time and hindsight offer a camera angle that’s harder to question, and the one thing that seems unequivocal is that certain key players cannot be discounted whenever and wherever the story of Nigerian movies is told. These are the trailblazers and fire starters you will encounter in Reflections on Nigerian Movie Industry, a recent compendium of sorts, penned by Femi Akintunde-Johnson. You probably know him as FAJ.

FAJ will be the first to confess that he’s a “reporter for life”; consequently, Reflections, subtitled Salute to Pioneering Creativity & Perseverance, is his attempt to honour and memorialise the folks who felt their way blindly along until they uncovered the elephant that is today the Nigerian movie industry – aka Nollywood. Toss the provision of “data” and “original stories” about these key players into the mix and a book is done. Written in a conversational style, clearly a stylistic choice to draw in all eyeballs, Reflections can be considered a natural outcome of Akintunde-Johnson’s decades-old dance with entertainment in Nigeria. From reporter at The Punch Newspapers to editor and co-founder of publications like Fame and Encomium, to being the brain behind the nation’s leading music and movie awards, the author has never been far removed from the people whose lives he chronicles in this book.

What Reflections captures in snackable bites, divided into seven chapters, are the profiles of the luminaries whose radical thinking and struggles manifested in the shining beacon now called Nollywood: The Incomparable Progenitors, The Generalissimos of the Genesis, The Pathfinders, The Impresarios Across the Ages, The Masterminds of Nollywood, The Reigning Halcyon Ferment, and Distinguished Mentions. Each chapter comprises entries – snapshots if you prefer – of household names from the Nigerian movie industry from inception to date. Each entry is illustrated with a photograph wherever possible – sometimes an iconic pose, especially in the instances of subjects who have since passed.

Entertainment Weekly, the popular American magazine, once postulated that, “half of the fun…of any awards show is in predicting the winners. The other half is in griping about the results.” Consequently, half of the fun of reading Reflections is flipping through its pages to discover more about our favourite celebrities, movie stars and industry power players. The other half could arguably be the tantrums thrown when a cherished name is missing from the informal listing of notables, or the provided biodata is incomplete. Reflections is a conversation starter in a handy package; a worthy keepsake slash mini coffee table-type book. But be sure to buy backup copies before you plop a copy in the reception hall of your enterprise, because its portability imbues it with the capacity to grow legs, if you know what I mean…

It is almost impossible to write a book on any aspect of the performance arts in Nigeria without leading with the late Hubert Ogunde, multidimensional performance artiste, groundbreaker and storied mentor of giants. Ogunde’s genius bestrode acting, playwriting, theatre management, celluloid filmmaking and a vast array of firsts. His profile opens the book as one of The Incomparable Progenitors. The chapter also includes profiles of the electrifying Duro Ladipo, the operatic Kola Ogunmola and the able Oyin Adejobi. Call them the first generation. We call them legends.

The Progenitors chapter – and the bulk of The Generalissimos of the Genesis, which follows it, impactfully highlight the looming and spearheading presence of theatre practitioners from the Western part of the country at the emergence of professionalism in the performance arts in Nigeria. Names like Segun Olusola (creator of The Village Headmaster), Moses Olaiya (aka Baba Sala), Ade Afolayan (Ade Love), and Ola Balogun – cinematographer of international repute and one of the earliest and leading lights of Nigeria’s brief romance with celluloid, etc., rightfully grace these pages.

After setting the tempo with the grandmasters, the author goes on to reveal The Pathfinders and The Impresarios Across the Ages, predominantly a showcase of practitioners for whom television served as the springboard to success in video movies, and whose pushing of the boundaries on Nigerian television engendered a consequential stirring in the private sector. The profiles of unimpeachable icons like Tade Ogidan, Amaka Igwe, Zeb Ejiro, Peter Igho, Sadiq Daba, Tunde Kelani, Olu Jacobs, Taiwo Ajai-Lycett, Sam Loco-Efe, and others fill these pages. The chapter is naturally followed by The Masterminds of Nollywood, a slim section that features film marketer Kenneth Nnebue (of the Living in Bondage fame), video movie pioneer Muyideen Aromire, producer and actor Okey Ogujiofor, director Chris Obi-Rapu – all of them directly or indirectly connected to the propagation of dramatic performances on video tapes at the dawn of Nigeria’s movie industry.

But enough with the name-dropping. There are tidbits and nuggets of little-known info scattered throughout the pages of the book for the avid Nollywood history buff and fans. For instance, a postscript under Moses Olaiya’s entry, reportedly supplied by noted film scholar Shaibu Husseini, asserts that Baba Sala may have shot one of his comedy movies, Agba Man, on VHS, as opposed to celluloid. The irrepressible Uzor Maxim Uzoatu also plays a cameo with an addendum to Okey “Paulo” Ogujiofor’s profile in the book.

Some of the entries in the book are dated or indicative of the year the section was written. The author could have taken the time to review the manuscript to adjust the dates. A section calls Lanre Hassan “64 this year” and adds 2014 in parenthesis, suggesting that section was written in 2014 and not revised before publication in 2021. Zeb Ejiro’s piece has similar issues and has clearly not been edited to reflect the recent rebirth and revival of his most popular titles through not-so-successful remakes (a new fad that’s sweeping the industry). That kind of sloppiness dents the shine of the book in a few places.

Nollywood practitioners are the igniters of dreams and the industry is a shiny symbol of the oft-disrespected Nigerian spirit. Nollywood is what Nigeria can do when truly fired up. It will take more than one book to fully tell the story of Nollywood, because each individual featured in Reflections is probably worth a book in his or her own right, but Femi Akintunde-Johnson’s book is a good start. Recommended!

. Osofisan is a writer and founder of AfricanWriter.com. His movie, Over her Dead Body, is billed for release later this year.

Ngige’s sermon on the mount, by Femi Adesina