The National Emergency Management Agency has received another batch of 195 stranded Nigerians from Libya.
Alhaji Idris Muhammed, Coordinator, Lagos Territorial Office, NEMA, who confirmed the development to newsmen on Thursday in Ikeja, said this was the largest batch of voluntary returnees since the exercise began in April 2017. 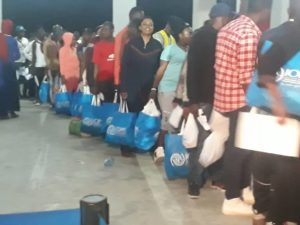 Muhammed said the Nigerians arrived at the Cargo Wing of the Murtala Muhammed International Airport, Ikeja at 8.20p.m on Wednesday aboard a chartered Al Buraq Air aircraft with registration number 5A-DMG SEB.
He disclosed that they were the 69th batch of returnees brought back by the International Organisation for Migration and the European Union under the Assisted Voluntary Returnees Programme.
According to him, after profiling, the breakdown of the new returnees shows that they comprise of 71 female adults, 25 female children and 17 female infants.
He said: “They also include 60 male adults, 12 male children and 10 male infants.
“Among them were three male returnees with minor medical issues and seven pregnant women.”
Welcoming the returnees, he advised Nigerian youths to look inwards and utilise the money they had set aside for embarking on perilous journeys, to set up good businesses in the country.
He said: “Since the EU closed their borders for irregular migrants, the journeys through irregular means have become wasteful and dangerous.
“If you had used the huge amounts of money spent on these fruitless efforts in Nigeria to start a business, you would have been very successful in your endeavours.
“Therefore, you need to strive and embrace the Federal Government’s enabling initiatives to empower the youths.”
One of the returnees, Kehinde Obala from Badagry, Lagos, regretted his sojourn in the volatile North African country.
The 66 years old man said he was a successful mechanic and pastor in Libya until the war broke out and he lost everything.
Obala said: “I had a church over there but everything I worked for were destroyed.
“Ordinarily, I never thought of coming back to Nigeria but when I was assured and promised that I will be resettled when I return home that was why I came back.
“I have wasted my life except IOM and government are magnanimous enough to help me start from the scratch.”
NAN reports that NEMA said as at March 15, 12,574 Nigerians have so far returned from Libya under the Assisted Voluntary Returnees Programme, which began in April 2017.
NAN reports that NEMA said over 4,900 of the returnees have also been trained on various skill acquisition and empowerment training by IOM through special funding facilitated by the EU.

Human trafficking: How I was lured to Libya for prostitution — Victim

Why we ‘sacked’ some staff — NEMA