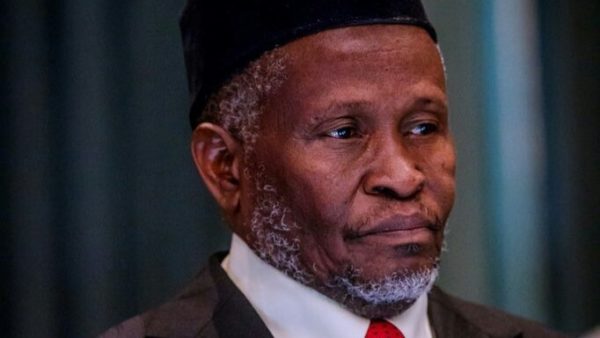 The Senate on Tuesday resolved to proceed with allegation of corruption against the former Chief Justice of Federation, Tanko Mohammed despite his resignation.

Meanwhile, Senate has wished the outgone Chief Justice well, following many years of meritorious service to the nation and to pray for his good health.

In an unprecedented petition, justices of the apex court had jointly accused the former Chief Justice of Nigeria of corruption, maladministration and incompetence.

Senate, however  mandated Senate Committee on Judiciary, Human Rights and Legal Matters to investigate the matter with the aim of resolving the issue.

But on Sunday, the Chief Justice if Nigeria tendered his resignation hinged on health ground.

At the resumption of plenary session, Chairman, Senate Committee  on Judiciary, Human Rights and Legal Matters, Senator Opeyemi Bamidele coming under order 41 and 51 recalled how the attention of the Senate was drawn to the media report on the state of affairs in the Supreme Court of Nigeria.

Speaking on the motion, Senator Bamidele told the Senate that most issues raised by the justices of the Supreme Court and other stakeholders within the judiciary, need to be addressed urgently to prevent an eventual shut down of the Judiciary.

Supporting the motion, Deputy Senate President, Senator Ovie Omo-Agege said that there is no reason for judicial arm of government to lack anything financially, adding that this should not be allowed to continue.

Also speaking in support of the motion, Senate Minority Whip, Senator Chukwuka Utazi said that the Senate need to get to the root of the matter in order to find lasting solution to the issue.

mandate the Senate Committee on Judiciary, Human Rights and Legal Matters to go ahead with its assignment in the quest to find a lasting solution to the matter by interacting with relevant stakeholders to address the complaints raised in the petition by the Justices of the Supreme Court;

The Senate also mandated the Committee to interface with the relevant stakeholders in the three arms of government as well as the Bar and on the Bench and collate aggregate views and positions on the short term, medium term and long term measures needed to decisively address the crisis facing the Judiciary, including the immediate fiscal intervention as well as long term and sustainable budgetary allocations, required for the optimal performance of the Judiciary, in line with global best practices.