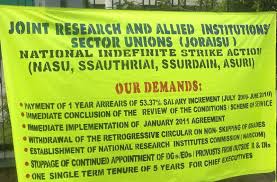 Research Institutes in Ibadan, Oyo State on Wednesday joined their counterparts across the country in the strike declared by the Joint Research and Allied Institutions Sector Unions.

The Nigeria Institute for Social and Economic Research and Institute of Agricultural Research and Training joined the strike which began at midnight.

He told the News agency of Nigeria that the Senior Staff Association of Teaching Hospitals, Research Institutes and Associated Institutions also joined.

Babatimehin said JORAISU embarked on the strike to demand for adequate funding of research institutes and release of Schemes and Conditions of Service.

He explained that the arrangement was recently reversed by the Federal Government and the unions are demanding the status quo.

“JORAISU is also demanding the establishment of a central supervisory agency for research institutes to be known as the National Research Institutes Commission,” he said.

Babatimehin also said that NISER’s main gate would remain shut between 8am and 4pm daily throughout the duration of the indefinite strike.

He said: “We enjoin the management to impress it upon the Federal Government, the need to look into the demands of JORAISU and act accordingly.”

Solomon Abodunrin, Chairman, IAR&T chapter of SSAUTHURIAI, said the demands had been presented to the Federal Government since 2010, but the latter had not done anything.

Abodunrin said: “Series of meetings were held with no result; some of our agitations are on non-payment of peculiar allowances/earned allowances and inadequate funding of research institutes.

“Our branch is in total support of the strike as members have been directed to stay at home.”

Dr. Kayode Ayegboyin, the CRIN chapter Chairman of ASURI, also told NAN that CRIN complied with the directive for the strike with workers boycotting their duty posts.