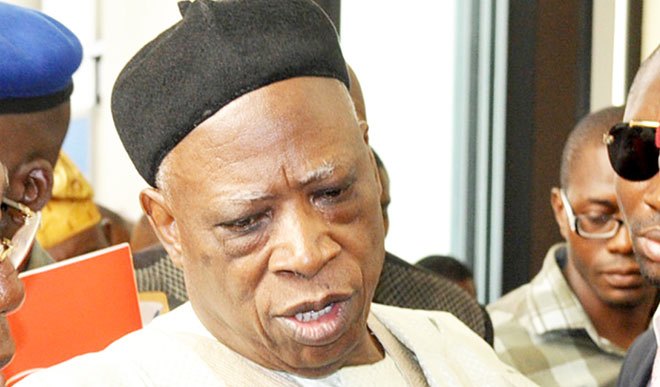 Senator Abdullahi Adamu on Thursday disclosed that he is not in any way after the President of the Senate, Dr. Abubakar Bukola Saraki, because he is like a son to him, adding that removing him right now is an exercise in futility.
Adamu in a statement in response to allegations raised against him by Senator Obinna Ogba that he is planning to destabilize the Senate, said he had every right to contest for the seat of the Senate president when the eighth senate was inaugurated but decided to back out.
Adamu, who was not at the plenary session when the point of order was raised on the alleged plot against the Senate leadership, said he is ready to appear before the panel and also challenged Obinna to present incontrovertible facts to prove the allegations.
He said: “I am not in anyway after Saraki. Saraki is like a son to me. I have every right to contest for the Senate President seat three years ago when the 8th Senate was inaugurated, but I never did because I wasn’t interested. It is therefore, not logical for anyone to say I’m interested in the seat now, and will be planning to destabilise the Senate. To achieve what? For what purpose? It is not right for anyone to make such unfounded insinuations.
“We are almost three years in office, election year is drawing nearer, and I think any one thinking of upstaging the leadership of the Senate for any reason will only be fighting a lost battle because it is not what should naturally occupy the mind of any serious minded lawmaker now.
“I am not in anyway afraid of anyone who thinks I’ve offended him, I have the neck to carry my cross, but no one should cook up lies just to discredit me or any senator for that matter.
“If I’m asked to appear before the committee on Ethics and Privileges, I will come out clean because whoever raises the allegations will have to come out and present incontrovertible facts to prove the allegations. Then, names of other so called collaborators will be made known, they will be confronted, evidence of such meeting will be produced, those accused will be asked to defend themselves, and recommendations will be made by the committee based on facts presented to it.
“As for me, let me repeat that I’m not in anyway after Saraki, I can’t be after Saraki, and I won’t do anything to upstage the leadership as being claimed because it’s a fruitless venture.
“But if I believe strongly in cause, I stand by it. If I’ve offended anyone by my strong stand on some issues in the Senate in accordance with my conviction, I stand by it anytime. But the issue of trying to cause disaffection in the senate is a no issues at all.
“Whatever we do in this world, we must be ready to bear our cross, I’m ready to bear mine. Anyone who know me will say clearly that I’m not plotting to remove Saraki. Let them look for another thing to say.”
Adamu had been in war part with Senate President since he led some senators out of plenary session over the passage of the Electoral Act.