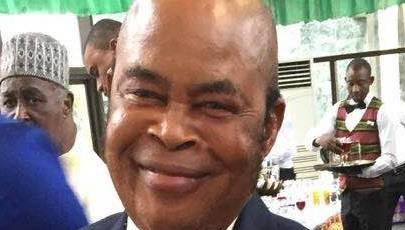 Prosecution counsel, Charles Adeogun-Philips, on Thursday withdrew from the trial of Supreme Court judge, Justice Sylvester Ngwuta, who is being prosecuted by the Federal Government on money laundering charges of over N500 million.
Adeogun-Philips, engaged from the International Criminal Court, announced his decision to withdraw from the case when it came up for continuation of trial before Justice John Tsoho of the Federal High Court, Abuja.
The lawyer announced his withdrawal when the case was called for cross-examination.
Adeogun-Philips rose to tell the judge that he had decided to withdraw from the case, but he did not give reason for his withdrawal.
Hajara Yusuf, a counsel from the Office of the Director of Public Prosecutions of the Federation, however, took over as the leader of the prosecuting team.
Yusuf said: “I have been instructed to inform the court that Charles Adeogun-Philips, the lead prosecuting counsel, will no longer be appearing in this matter.
“In view of this change, myself and my colleagues will be appearing, subject when arrangement will be made in due course.”
The judge thanked Adeogun-Philips for his courtesy in the course of his appearance for the prosecution.
Tsoho said: “The court has taken into notice of the withdrawal of the prosecution counsel Charles and the court wishes him success in his further endeavours.”
The lead defence counsel, Chief Kanu Agabi (SAN), also commended the erstwhile prosecuting counsel’s conduct and wished him success too.
The lead defence counsel, Agabi, however, cross examined Nwaba Linus, the first prosecution witness.
Linus said he was paid for the services he rendered to the defendant because he thought it was legal
Linus said: “I would not have accepted the payment if I thought it was a crime, but he explained the source of the money that was why I accepted.
“The work I did for the defendant was in the open.
“I documented all the construction I did for him and the document cannot be regarded as illegal.
“I have never received any complain against the defendant or heard of any report from police or any enforcement agency.”
The witness further stated that he was arrested and detained for seven days by the Department of State Services, adding that he did not consider his arrest and detention as justified.
Yusuf asked for an adjournment to enable her put things in order because of the changes.
Justice Tsoho adjourned the case till February 13 for continuation of hearing.
Ngwuta was arraigned on a 16-count charge, including money laundering and offences relating to obtaining multiple passport.