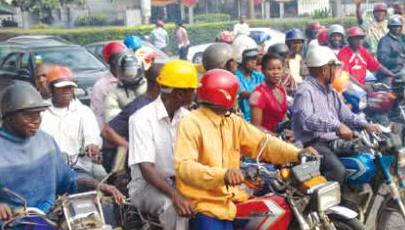 The Chairman of the Joint Action Front and former President of the Academic Staff Union of Universities, Dr. Dipo Fashina; and the Secretary of JAF, Abiodun Aremu, were among those arrested by the police in the process of dispersing the planned protest by commercial motorcycle riders in Lagos State on Wednesday.
The commercial motorcycle riders, popularly known as okada, had planned the protest to show their displeasure over their continued ban from some major roads in Lagos State.
But policemen from the Lagos State Police Command did not allow the protest to commence before they moved in and arrested Fashina, Aremu and other members of the JAF and some okada riders.
The Deputy Commissioner of Police, Operations, Lagos State Police Command, Tunde Sobulo, said that the organisers had no “right to hold the protest.”
But Fashina disagreed with Sobulo, whose team arrived at the secretariat of the Nigeria Labour Congress in Yaba, Lagos State as early as 8am to prevent the protest from taking off.
Fashina said: “We have a right as a people, when we are aggrieved, we have a right to protest through peaceful assembly.
“We must resist the law.
“Rich people, they ride cars.
“And their children, they kill people every day.
“They don’t ban them.
“That is class injustice.
“This is a fight for poor people, not Okada people alone.”
The policemen, led by Samuel Orisakwe, after allowing the protesters to walk for a few metres from the NLC secretariat, forcefully stopped them.
Aremu said on the stoppage of the protest: “We have a long battle to wage.
“Next time, nobody will stop us.
“When we are going to hold the mother of all rallies, nobody will work in Lagos.
“We will limit our rally places today so we don’t expend all our energy because it is a long drawn battle.”
Fashina, Aremu and the others were picked up by the police after the protest.