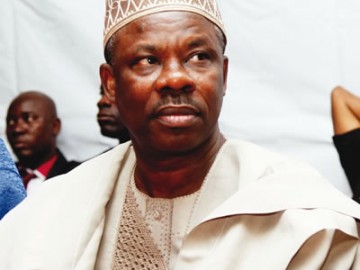 Senator Akin Odunsi, presenting Ogun West Senatorial District, has called on the governor of Ogun State, Senator Ibikunle Amosun, to as a matter of urgency intervene in the brewing crisis between him and the local government authority in Ado- Odo/Ota, to avert crisis in their party, the All Progressives Congress.
Odunsi and the local government authority in Ado- Odo/Ota are clashing over the reconstruction of the collapsed link bridge between Ota and Lagos State.
Apparently perturbed by the twist the fracas was taking, Odunsi said he had written petitions to party leaders and the police, alerting them of the brewing trouble.
A community leader in Ado-Odo/Ota, Tunji Musa, said that contractors of the Federal Government, under the facilitation of the senator, had already been mobilised to reconstruct the bridge, adding that members of the community were shocked when they suddenly saw a signboard four months after the senator’s contractors moved to site, being erected by the local government, signifying that it too wanted to carry out repairs of the same collapsed bridge.
Musa, who spoke with journalists at Ikeja, Lagos State, opined that he perceived a party fracas, which needed to be settled, so that the building of the bridge, which was more important to the community, could be harmonised between the two opponents.
The Director of Information of the Council, Iyabo Oyerinde, denied that there was a clash between the local government and the senator, stating that the face-off was merely a zeal to serve the people.
But Odunsi said: “They said I didn’t inform the local government that I was embarking on the construction of that bridge as a Constituency Project.
“It has also been said that the state government listed the same project as part of its contribution to the development of Otta.
“These are not true and amount to covetousness or at worst duplicity.
“The fact is that the Ilo-Ifako Bridge is a constituency project of Senator Akin Odunsi.
“It is backed up by an Act of the Nigerian Parliament, the National Assembly, and was signed into law by the President.
“It is captured in the 2013 Appropriation Act, especially since it is a law in black and white.”
Odunsi said he was not happy that the state or local government should be at a loss about his intervention in the construction of the bridge, urging the local government to seek for other projects to do for the community.
He further said that he embraced and took up the matter of the construction of the bridge because it was one the major promises he made to the community during his campaign.
The lawmaker explained further about the bridge: “It was captured in my 2012 presentation to the Senate.
“When it was not implemented, I had to write a reminder to the Minister of Works, Architect Mike Onolomenem, and followed it up with another letter on May 23, 2013 to the Chairman, Senate Committee on Works, Senator Ayogu Eze.
“I also made several visitations to the Ministry to actualise it.
“Through the 2013 Appropriation, the same project was approved and the Ministry of Agriculture and Rural Development was mandated to execute it.
“It was contained in Vol 1, Page 151 of the 2013 Appropriation Act.
“Following the Presidential assent, it was advertised by the Ministry and awarded to TEMMADOT Contractors Limited after due process.
“Just as the contractor moved to site, it was learnt that the Ado-Odo/Otta LGA came to erect a sign post to signal that it was also going to commence work on the same project.
“The residents had complained that a makeshift bridge they erected had collapsed after a heavy downpour in February, 2013.
“I personally paid an on-the-spot visit to the place.
“Thereafter, I mobilised the Ministry of Works engineers and they assessed the extent of damage.
“The Ministry of Agriculture and Rural Development at the federal level later came to clear the debris at my instance.”
Odunsi said he was also not happy that party members like him and the local government should be working at cross-purposes.
He added: “I have been constrained to write to the party leadership to call them to order.
“I have also notified the police on this sad development to forestall a breakdown of law and order that could be spawned by this adversarial stance of the State against the Ogun West people.”
Oyerinde denied that the Federal Government contractors arrived at the site before the local government erected a signpost at the site of the collapsed bridge.
She also expressed the willingness of the council to leave the project for the senator and move to other areas in the community.