Photo as Ooni, Dangote, others visit Abiodun over father’s death 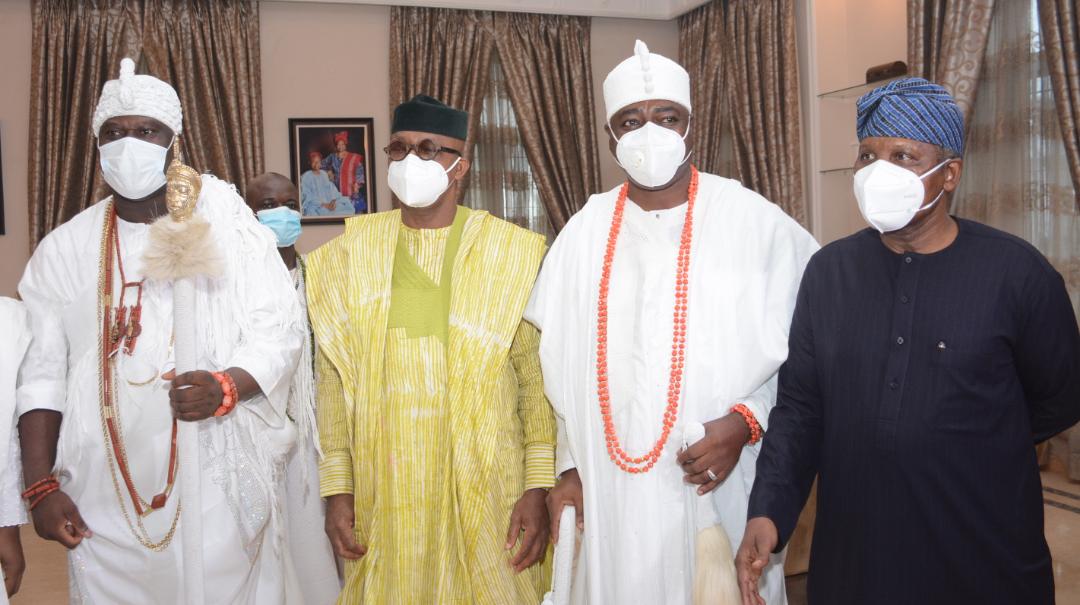 The News Agency of Nigeria reports that a former National Chairman of the All Progressives Congress,  Adams Oshiomhole, was also among the dignitaries who paid condolence visits to Abiodun at his Iperu-Remo residence.

Speaking during the visit, Oba Ogunwusi urged Nigerians to strive to live a life of service in order to be positively remembered after their death.

The monarch noted that it was imperative for people to engage in good deeds while alive, stressing: “Pa Abiodun lived a life of service, not only to his immediate environment but also, to the whole country.”

He said the deceased imparted the right values, morals and good character in his students while he was a teacher, adding that the lessons had grown with them and helped them to be distinguished in the society.

The royal father urged members of Abiodun family not to mourn their father’s departure but to celebrate him, as he had left a legacy worthy of celebrating.

In his remarks, Dangote noted that the deceased used his profession to touch many lives, adding that many people across the country would continue to remember him for his good works.

Oshiomhole, while also eulogising the virtues of Pa Abiodun, said that he left a good legacy for his children and the entire nation.

Also, Oba Ogunfolarin Ogunsanwo, the Alara of Ilara Kingdom in Epe, Lagos, described the deceased as an erudite scholar who demonstrated competence, zeal and professionalism, and imparted knowledge in his students during his earthly sojourn.

The traditional ruler stated that the deceased was a great man who lived and left a legacy that should inspire others.

He prayed God to grant the departed eternal peace and the family the fortitude to bear the loss.

On his own part, Chief Executive Officer, Adron Homes,  Adetola King, noted that Pa Abiodun was passionate in inculcating the right values into his students, many of whom, he said, had become eminent personalities in the society.

Responding, Abiodun urged all to be mindful of their last days on earth and encourage others to do things that would make them to be remembered for good after their death.