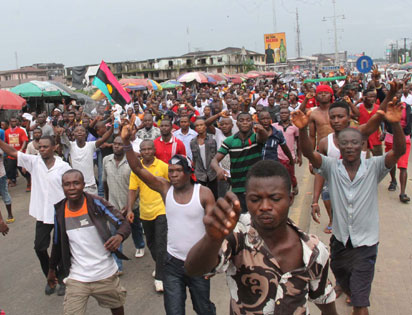 Activities were on Friday grounded in Onitsha, the commercial city of Anambra State, and its environs by youth sympathetic to Indigenous People of Biafra, who were protesting the continued detention of their leader, Nnamdi Kanu.
One of the protesters was feared dead in Onitsha.
Vehicular movements were also disrupted along the Onitsha/Enugu Expressway, Onitsha/Owerri Road, Uga, Atani, Ogaru Local Government Roads, Onitsha/Aguleri, Nsugbe, Nkwelle/Ezunaka Roads, Old and New Market Roads, Nkpor, Ogidi, Obosi Roads, thereby causing traffic gridlock on all the roads within and outside Onitsha.
Markets in Onitsha and its environs were all shut between 7am and about 2.30pm when some traders were seen loitering around their markets to see if they would be allowed to open, while some decided to go home for the day as they were also afraid that they could be attacked.
Though the Anambra State Government had announced through the market leaders who also exchanged text messages to ensure that their markets were open, the traders seemed to be unwilling to go to their markets as most of them who normally leave in the morning for their markets were sighted on their streets discussing the protest, which IPOB declared earlier in the week.
Markets shut down included Onitsha Main Market; Ochanja Central Market, Onitsha; New Tyre Market, Nkpor; New Auto Spare Parts Market, Nkpor; Building Materials Market, Ogidi; Ugwuagba Market, Obosi; Electronics Market, Onitsha; Bridge Head Market, Onitsha, that has over 21 markets attached to it; and other small markets in and outside Onitsha.
Even shops along the streets of Onitsha and its environs, including Awka Road, New Market Road, Old Market Road, Oguta Road, Limca Road, Iweka Road, Modebe Road, Sokoto Road and Haruna Street lock-up shops were also seen under lock and key.
The IPOB supporters, numbering over 30,000, were earlier seen gathered at Chief Chukwuemeka Odumegwu-Ojukwu statue by Niger Bridge Head, also known as Odumegwu Ojukwu Gateway, Niger Bridge Head Onitsha, chanting and dancing pro-Ojukwu and Biafran songs, from where they marched peacefully down to Upper Iweka Flyover.
They were seen marching from Upper Iweka Flyover to Onitsha/Owerri Road, to Nkpor Junction, Ochanja Central Market, Onitsha Main Market, Old and New Market Roads, Onitsha chanting anti-Federal Government, Police, Army and Navy songs, demanding the release of Kanu, whom they said has been incarcerated for over three weeks now, and the continued arrest and detention of their members as well as the actualization of the Biafran cause.
There was unusual presence of the police on the major roads and streets of Onitsha, but their presence did not deter the protesting IPOB supporters, who were also cautious of the behaviour of their members to road users and petty traders who wanted to cash in on the closure of markets and big stores and shops to do brisk business.
IPOB supporters who wanted to be unruly on road users were promptly shouted on and cautioned by their leaders to behave well, that molestation and dispossessing people of their property and goods, looting of people’s shops and property were not part of their agenda.
Meanwhile, in Port Harcourt, hundreds of pro-Biafra supporters made real their threat to protest in Rivers State on Friday as they marched on Okobe Community, Ahoada West Local Government Area of the East West Road.
An eyewitness, who spoke to Saturday Vanguard, said they were chanting solidarity songs as they marched on the road.
According to Johnbull Tamunoemi, the protesters were tactical to avoid any clash with security operatives.
Tamunoemi said: “I saw some of them jump into the bush when they sighted a patrol vehicle belonging to the Nigerian army.
“The protesters were over 200.
“They were singing pro-Biafra songs as they marched on the street.”
Eyewitness accounts said the activities of the protesters did not disrupt free flow of traffic.
At press time, Saturday Vanguard gathered that police vehicles were seen leaving Port Harcourt to the area, apparently to stop the protest.
There was heavy security presence on all parts of Port Harcourt on Friday to ensure the protest did not hold.
Probably to beat the heavy security presence, the pro-Biafra supporters had to relocate their protest to the East West Road part of Ahoada West Local Government Area, which is less than two hours drive from the state capital.
And in Asaba, Delta State, at least 1,000 youths on Friday stormed the ever busy Onitsha/Asaba/Benin Expressway to protest against the continued detention of Kanu, the Director of Radio Biafra.
The protesters, who came out at 2:30pm, caused stampede and gridlock as road users made u-turn facing the direction they were coming from, while those living on the expressway down to the Onitsha Head Bridge in the Asaba metropolis fled their homes and shops for fear of being attacked by the protesters, who chanted war songs as they demand for the unconditional release of Kanu.
The agitators, under the aegis of Indigenous People of Biafra, Delta State Chapter, began the peaceful march at Agbor and moved to Asaba in a motorcade.
Vanguard.