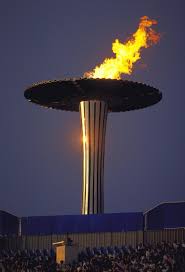 Share
Facebook Twitter LinkedIn Pinterest Email
The Olympic flame arrived South Korea’s Incheon International Airport on Wednesday, 100 days ahead of the upcoming Winter Olympics in Pyeongchang.
Organising Committee Chairman, Lee Hee Beom, said the day was a “very significant moment in history’’ for South Korea, after the torch touched down on a special charter aircraft from Greece.
Lee took the chance to reiterate that the Games would be safe, saying “the 2018 Games will be an Olympics of peace and harmony’’.
He said: “We will ensure that all athletes and everyone coming to Pyeongchang will have the time of their lives.’’
The torch was lit at the site of the ancient Games in Olympia on October 24, and has been carried on a relay in Greece covering more than 2,000 kilometres.
It will now continue through nine provinces and eight major cities in South Korea before it arrives at the Pyeongchang Olympic Stadium in time for the opening ceremony of the Winter Games on February 9.Some 7,500 torch bearers are due to transport the flame on its route across the Asian nation.
Post Views: 0
Incheon International Airport Olympic flame Pyongyang South Korea
Share. Facebook Twitter Pinterest LinkedIn Tumblr Email