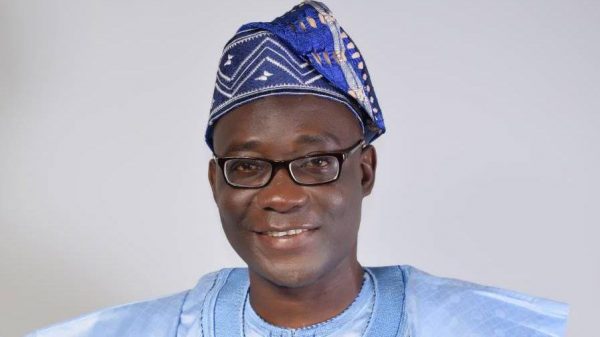 Share
Facebook Twitter LinkedIn Pinterest Email
The governorship candidate of the Peoples Democratic Party in the July 14 election in Ekiti State, Prof. Kolapo Olusola, has asked the All Progressives Congress candidate in the poll, Dr. Kayode Fayemi, to explain how he spent statutory allocations and other funds that accrued to his government between 2010 and 2014.
Olusola said documents from the Office of the Accountant General of the Federation, the National Bureau of Statistics among others showed that Fayemi collected a total of N165 billion as allocations, excluding regular funds from Excess Crude Oil Account, grants, internally-generated revenues among others, but Fayemi still took N25 billion bond and N35 billion commercial loans with nothing to show for the funds.
In a statement by the Director General of the Kolapo Olusola Campaign Organisation, Chief Bisi Kolawole, in Ado-Ekiti on Sunday, he also said the Ayodele Fayose administration had done creditably well despite the lean resources at its disposal.
The statement said: “In 2011, Fayemi got N40.5 billion as monthly statutory allocations. In 2012, he got N39.8 billion. In 2013, he got N44.3 billion and in 2014, he got N40.1 billion. Whereas, the Fayose administration got N28.2 billion in 2015, N18.8 billion in 2016 and N25.6 billion in 2017.
“Apart from the above monthly allocations, Fayemi still got regular funds from the Excess Crude Oil Account, IGR among others. Despite what Fayemi got, he still borrowed N25 billion from the Capital Market and took N31 billion commercial loans. The question is, what did he do with the money? Nothing.
“The N25 billion bond and commercial loans, through which he mortgaged the finances of our dear state for 20 years, were spent on nothing. He proposed an event centre, it was never completed. He said he would build a new Governor’s Office, he only scraped a parcel of land near the House of Assembly Complex and did nothing. His new Ojaba Market, for which he erected a billboard at the entrance of the palace of Ewi, never saw the light of the day.
“His flyover only existed in his tommy. He half-completed a state pavilion and squandered the state’s resources on frivolities. If he stopped at that it would have been better, but he went ahead to divert state funds . An example is the N850 million given the state by the Universal Basic Education Commission (UBEC), Abuja which he diverted leading to the suspension of Ekiti State from the commission’s funding for years.”
Kolawole said in contrast to Fayemi’s waste of resources, the Fayose administration, in which Olusola is the deputy governor, had been prudent.
He said: “The table of funds received by Fayemi and Fayose given above are public documents available in the offices of the NBS, OAGF and even on their websites. People can go there and access. Moreover, people can see what the Fayose administration has done with the meagre resources at its disposal.
“A new Governor’s Office, new High Court Complex, Adunni Olayinka Women Development Centre, a flyover have been built. A new Ojaba Market is almost completed. Roads in Emure, Ise, Efon, Ijero, Omuo, Afao, Ilawe, Ikere, Ikole etc have been dualised. Car Wash- Afao Road built, same for Dehead- Police Headquarters Road among others.
“The teachers Fayemi planned to sack through a vindictive test, have been motivated and our state now ranks first in public examinations in the federation. This is the good trend that Prof Kolapo Olusola will continue with when elected governor. Fayemi and the APC have nothing good to offer the people of the state.”
All Progressives Congress Ayodele Fayose Chief Bisi Kolawole Ekiti State Peoples democratic Party Prof. Kolapo Olusola
Share. Facebook Twitter Pinterest LinkedIn Tumblr Email