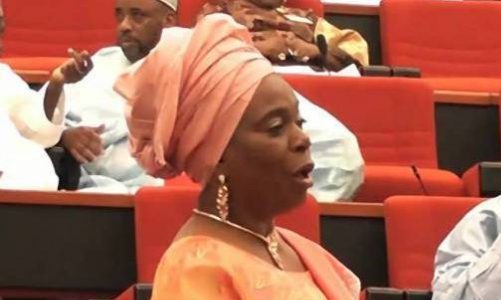 The Peoples Democratic Party in Ekiti State has commended the judgement of the National Assembly elections petition tribunal which declared the PDP candidate in the February 21, 2019 National Assembly elections, Senator Biodun Olujimi, as the authentic winner.
The party congratulated the Senator for being a good fighter for right and justice, which the tribunal has justified by establishing that the candidate of All Progressive Congress, Prince Dayo Adeyeye, was wrongly and fraudulently declared the winner instead of her.
The party in a statement which was made available to journalists in Ado Ekiti by its State Publicity Secretary, Jackson Adebayo, maintained that the judgment has reaffirmed that all elections held in Ekiti State in the recent times were full of unguided manipulation and deliberate abandonment of ethics of democracy.
Adebayo added that elections in Nigeria has been bewildered to the level where only courageous judges at the tribunal could write the wrong as was done by the tribunal that has just declared Olujimi as the authentic winner for Ekiti South Senatorial District.