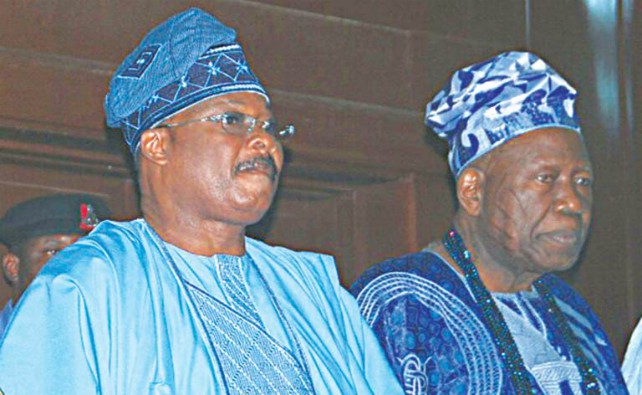 The Olubadan of Ibadanland, Oba Saliu Akanmu Adetunji, Aje Ogungunniso 1, on Thursday asked rhetorically why the Oyo State Governor, Abiola Ajimobi, has continued to threaten him with deposition over the crisis that trailed the enthronement of 21 new kings in the city by the government.
The monarch, who denied committing any crime to warrant the deposition threat repeatedly bandied against him by the Oyo State Government, said his conduct and utterances since more kings were appointed have been guided by the need to preserve Ibadan tradition and cultural heritage.
A press statement from the palace, signed by Oba Adetunji’s Director of Media, Adeola Oloko, quoted him as making the remarks at his Popoyemoja, Ibadan Palace while receiving the Ataoja of Osogbo, Oba Jimoh Oyetunji Olaniyan, and members of his entourage who paid him solidarity visit on Thursday.
Adetunji said: “There are checks and balances in our traditional chieftaincy system for any monarch or chief who goes against the run of play. As I speak, I cannot see how mere, peaceful opposition to the controversial chieftaincy review by the Oyo State Government could be misconstrued to mean incitement against the government. As the matter is pending before the court, I do not want to comment on it. But, let nobody make mistake about it, where Ibadan people stand, is where I must stand for me to be relevant as king and custodian of our customs and tradition.”
Oba Adetunji, who commended President Muhammadu Buhari for his concern over the security situation in Ibadan, stated that it was to reduce tension that he decided to seek legal redress, stressing that contrary to speculations in government circle, the matter at hand is not political.
Speaking on behalf of the Ibadan kinsmen who were also present at the meeting, Muhammed Oladejo, who was also former National Secretary of the Central Council of Ibadan Indigenes, noted that the battle at hand is a battle of wits and not of guns.
Oladejo stated that it was as a result of dissatisfaction of Ibadan people to the chieftaincy crisis that led to the emergence of their new group, adding that the group was irrevocably committed to joining hands with the traditional ruler to ensure the preservation and protection of Ibadan heritage.
Also speaking on behalf of the Association of Ibadan Authentic Mogajis, Alhaji Abass Oloko stated that the founding fathers of Ibadan, who came from different places to settle down in Ibadan, did not make any mistake in bequeathing the traditional chieftaincy system that has been working since 1851.
In his own contribution, a member of Oyo State House of Assembly representing Ibadan South East Constituency II, Hon. Akeem Ademola Ige, stated that the review of any declaration is a major responsibility of government but with input from the House, adding that there is no such bill before the State House of Assembly.
Earlier, Oba Olaniyan had conveyed the message of solidarity and support of the entire people of Osogbo to the Olubadan and Ibadan people, saying as the forces of light often triumph over darkness, no power and principality would be able to destroy Ibadan heritage, which is widely respected because it is rancour-free.
Stressing that Ibadan and Osogbo have historical affiliation, the Ataoja stated that whatever happens in Ibadan has a way of reverberating in the entire length and breadth of Yorubaland, adding this is why he has decided with the support of his chiefs to solidarise with the Olubadan.