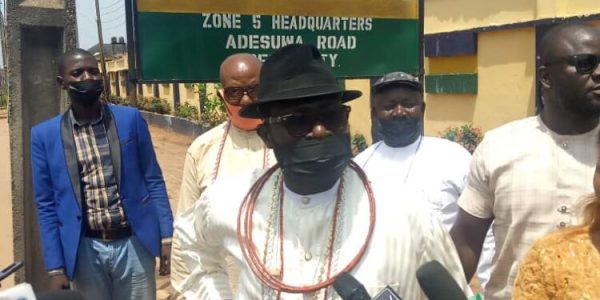 Share
Facebook Twitter LinkedIn Pinterest Email
Chief Ayirimi Emami, the Ologbotsere of Warri Kingdom, was on Friday grilled for two hours by the police in Zone “5”, Force Headquaters in Benin, Edo State over the festering Olu of Warri stool crisis.
Emami and some palace chiefs were at the zonal Force Headquarters following a petition written by some undisclosed persons in the Kingdom over the alleged invasion of the Olu’s palace by unknown persons in which some items were reportedly stolen.
Chief Emami reportedly arrived the Zone “5” Force Headquarters around 11:00 am and was interrogated for close to two hours before he was allowed to go.
The Ologbotsere had been embroiled in a fight with Ginuwa Ruling House over the procedure they adopted for the announcement of the passage of Ogiame Ikenwoli and subsequent pronouncement of a new Olu-designate.
The invitation to Chief Emami was signed by a Deputy Commissioner of Police, DCP Polycarp Dibia, Criminal Investigation Department (CID) Zone ‘5’ Force Headquarters, Benin with (reference No. CR3000/2N.5/X/AV/Vol/83/41 dated Wednesday 21st April,2021).
The letter addressed to Chief Emami, entitled ‘Police Invitation Letter. Re-case of Burglary, Stealing and Conduct Likely to Cause Breach of Peace’ said: “The office is investigating a case reported through a written petition to the Assistant Inspector-General of Police, Zone ‘5’ Headquarters in Benin City.”
It further reads; “You are required to have an interview with Deputy Commissioner of Police, Criminal Investigation Department (CID) Zone 5 Force Headquarters, Benin through the O/C Anti-Vice Section, Zone 5 Force Headquarters, Benin on Monday 26th April, 2021 at 1000hr. You are also requested to come along with Chief Macgrey Richmond.
“Kindly accept the warm regards of Assistant Inspector-General of Police, Zone ‘5’ Force Headquarters, Benin City, please”.
Emani confirmed that he honoured the invitation on Friday as a law-abiding citizen. He said he was invited by the police over the invasion of Olu’s palace, but denied any culpability over the incident.
He said: “I was actually invited based on the invasion of Olu’s palace which I told the police I have nothing to do with, because I was not in town when the incident happened.
“They said some valuables are missing in the palace, I said yes and that I am also in search of those valuables. I have been the custodian of those valuables. The key to strong room is with me, so how can I invade the palace to take them when originally they are kept under my custody?”
On his opposition to the new Olu-designate, Emami said, “As a person, I cannot say I am not in support of Prince Emiko’s aspiration to the Olu stool. I don’t have an issue with the person in question, but we have laid down procedures. That has been my position right from day one of this crisis. It has nothing to do with me. He is my brother and a friend; we have no personal issue.
“It is not that I am not in support of whatever they are doing but as Ologbotsere, I insist that the process and procedure must be followed.”
Ayirimi Emami Ologbotsere Warri Kingdom.
Share. Facebook Twitter Pinterest LinkedIn Tumblr Email