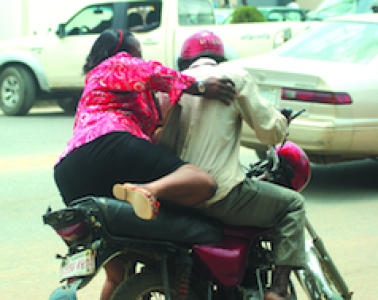 He told me all sort of things he could buy me if only I could accept to go out with him that day.
Shit! Talk of one nightstand!
He promised me things that even if he sold the bike, he still wouldn’t have been able to afford.
One of those pretty ladies that came to The Sun for their industrial attachment just told me now that she had discovered after careful investigation that Okada riders shy away from picking male passengers.
Some of them will tell you that ladies pay more because they don’t work for the money. It’s a lie!
They just want to feel those boobs bouncing and heaving at every plunge as they speed away.
I heard, but the Lord knows, have not yet seen…I heard that some of them have been known to have swayed some babes with the power of their sugar coated tongues and laid the babes that same day. Ha!
I was told they gauge the receptiveness of babes to their advances by the amount of their back pressure against her boobs. Once she doesn’t complain, they know she’s theirs for the asking.
I heard there’re babes who simply get wet once their mango touches a manly back. I think they are sick! I try not to judge people but in this instance, I think such ladies badly need to see a psychologist.
Abi na psychiatrist dem need to see?
If not, she might do it with a mad man before she knows it. I can’t pretend to understand such ladies. I’m one of those ladies who simply get repulsed if a strange or an uninvited man touches my boobs.
Just as they get susceptible ladies, so also they get men.
Yeah! Men, are you surprised?
Please don’t be! This is Naija! One day, a handsome guy mounted a motorbike. He was a dish.
He has all muscles in their right places. You didn’t need a soothsayer to tell you that an ounce of fat on him would be a criminal offence.
He obviously had been killing himself in a gym somewhere.
As soon as he got behind, the also muscular and good-looking bike rider engaged him in a chatty conversation. As they entered potholes and gallops, the passenger’s manhood took on a life of its own.
He tried to control the slithering serpent, all to no avail. The stubborn snake just kept raising its head until it was biting the back of the Okada rider.
The rider smiled with satisfaction. When he didn’t complain about the hardness trying to bore hole into his jean-clad buttocks, the passenger knew he had found someone of like mind with him.
Homosexuals!
The rider didn’t get to the destination of his passenger before he asked the man if he would like to stop at his place for a chilly bottle of beer. He naturally said yes.
Why, he was dying to ask the same question. They got to the rider’s home and tore into each other like there was no tomorrow. After the imperial act, they went their separate ways without some much as: “Let me have your phone number.” Wow!
The first time I heard this story, I was stunned. If you doubt it, you probably don’t live in our world. In this world anything is possible.
Was it not in Nigeria that something wonderful happened?
I was not born back then but a sage in my village told me the story. He said once in the western part of Nigeria, a child was born without a head. Our scientists did all they could to keep the child alive and finally succeeded in providing him with an artificial coconut head.
He later became the President of Nigeria. I believed it. In Naija, anything is possible.
In a nutshell, don’t be hoodwinked by those Okada riders as they enter potholes. You now know what they want or what they are trying to do.
If any of them tries such nonsense, better warn the fool fast. But please don’t slap him; he might give you a return match!
Some do not know the difference between a man and woman.
If you like that manly back pressing hard against your boobs, best of luck to you!
I know that some of you babes hate my guts today for exposing your secrets delights. Too bad!
As for Mr. Okada rider, better stash a lady in your house for emergency roll in the hay or get married!
If you are married and still salivate over current taping from female passengers’ boobs, you need to have your head examined.
I have another solution for you though. If the hunger for boobs hits you, try to rush home as soon as possible. Quickly call Mama Peter into the room and grab her boobs as if your life depends on it!
Suckle for all you’re worth. Start with the left boob then proceed to the right.
Do it for 30 minutes. Yeah, 30 minutes of boobs suckling while nicely missing a lot of passengers as business hours roll by.
As you suckle, remember to be shouting: “God, let this dangerous lust for boobs pass over me. But not as I will, but as you will!”
Shout it 30 times. 15 for each breast.
It has never failed to work. Now remember, for it to work effectively, you mustn’t under any condition make love with the recipient of your tongue.
Ha! Ha! Ha! Yeah I know…I love you guys too!
ebere20@gmail.com. SMS: 08155733671.