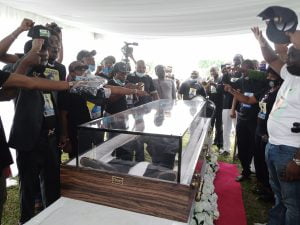 Falana made the charge while speaking with newsmen at the Lying-in-State, Service of Songs and Tributes for the late spokesman for the pan-Yoruba socio-cultural group, Afenifere, in Lagos.

The News Agency of Nigeria reports that the event took place at Police College, Ikeja, Lagos.

The legal luminary urged politicians to ensure a better nation through true democracy and the rule of law to honour the late Odumakin.

He described late Odumakin as an unrepentant human rights activist, who had been fighting against injustice and military rule since his undergraduate days at University of Ife (now Obafemi Awolowo University).

“All government officials who have sympathised with the family must solve the problems of our people whom Yinka was fighting for.

“To honour him, the political class must take this country to its right path. On the path of democracy, on the path of the rule of law and the path of human rights.

“Any government that wants to honour Yinka must live by those principles,” he said.

He said that the way to celebrate Odumakin was to rededicate ourselves to betterment of the masses, and development of country, built on fair play.

“Yinka’s dream is that this country be reclaimed and rebuilt so that our people can live life of prosperity.

“To all the politicians, the best tributes you can pay to Yinka is to ensure his dreams of a country we can all be proud of is realised. We are here to celebrate Yinka’s courage, consistence, humility and integrity,” he said.

Falana also charged the management of the Obafemi Awolowo University to lift ban on Students Union so that great human rights fighters could be produced, saying leadership quality is built on campus.

The legal luminary expressed profound sympathy with the family, adding that he was sure that the wife of the deceased would continue the struggle and not allow the dream of Odumakin to die.

Agbaje, who noted that Odumakin was director general of his campaign in 2007 when he ran for election, said that Odumakin’s interest was about the poor.

“He never rested for one day. He was always fighting for the poor. Yinka believed in a better One Nigeria. He believed Nigeria could work in equity, fairness and justice.

“He was a man of courage. Yinka feared nothing when he was fighting for a cause. We are all mourning,” Agbaje said.

The National President, Centre for Human and Socio-Economic (CHSR), Alex Omotehinse, told NAN that Odumakin would be missed for his commitment to the happiness of the poor masses.

Lanre Arogundade, a former president, National Association of Nigerian Students, said the deceased was one of the heroes of June 12 struggles, describing the late rights activist as a courageous and fearless man who spoke his mind.

Arogundade said: “In his death, we have lost a vocal voice, a hero of Nigerian people, who took his path and treaded it successfully.”

NAN reports that the event was graced by a host of civil society and ethnic groups, political stalwarts, lawmakers and many friends and acquaintances of late Odumakin.