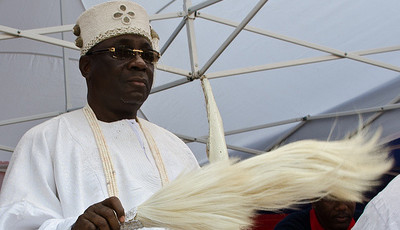 Share
Facebook Twitter LinkedIn Pinterest Email
The Federal Government has been advised to improve the situations in the oil producing states, where the chunk of the nation’s revenue is generated.
The Oba of Lagos, Rilwan Akiolu 1, gave the advice when the President of the Petroleum and Natural Gas Senior Staff Association of Nigeria, Comrade Francis Olabode Johnson, paid him a “Thank You Visit” in his palace in Lagos on for attending the Association’s 40th Anniversary celebrations in Abuja.
Obi Akiolu said: “We cannot continue to rob Peter to pay Paul.
“The government should take care of the areas where the oil is coming from.
“They should add value to the environment and the people in the area.”
The royal father, who blamed the accumulation of wealth by some Nigerians on greed, said the government should focus on welfare programmes that will improve the lives of Nigerians, especially the workers.
According to him: “Government should focus on developmental programmes such as hospitals, transportation, road infrastructure, power and other welfare programmes.
“The wage that workers are receiving is too small and the agitation for minimum wage may not have any effect.
“No matter how much the workers receive, it will be eroded by inflation as traders will also increase the prices of their goods.”
Oba Akiolu said also warned leaders in position of authority to beware of sycophants.
Johnson commended Oba Akiolu for sending a powerful representation with the staff of office to the Association’s 40th Anniversary celebration on October 18, 2018 in Abuja, saying: “This is an indication that you have the interest of the people at heart.”