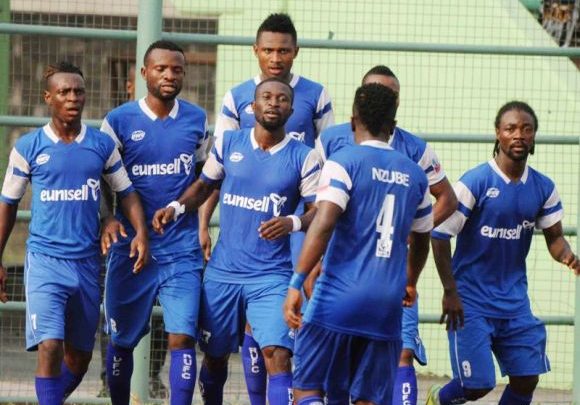 Ossy Martins scored the decisive goal as Rivers United edged past Nasarawa United 1-0 in the Nigeria Professional Football League on Wednesday.
Martins reacted quickest to prod home a header after Bakary Bamba had seen his spot kick in the 14th minute saved by the Nasarawa United goalkeeper, Folarin Abayomi.
The Port Harcourt club were not at their free-flowing best on Wednesday at the Yakubu Gowon Stadium and struggled to carve out chances against the plucky visitors who were unlucky not to score in the 22nd minute.
Esosa Igbinoba curled a 25 yard volley sweetly and with the Rivers United goalkeeper, Darlington Ovunda, completely beaten, the shot crashed against the post.
Rivers United never really controlled the game as Nasarawa United continued the probe and knock on the door in search of the equaliser.
The hosts however came inches close to claiming the second goal when second half substitute, Christian Weli, fired just wide from inside the box after some impressive work by Martins on the flanks.
“It was a good match. Both teams played well but we had some hard luck so I congratulate Rivers United for the match,” Nasarawa United midfielder Igbinoba said after the game.
Technical Manager of Rivers United, Stanley Eguma, also offered his post-match comments after the game.
“It was a very difficult match but I am pleased we won. We got our tactics right,” Eguma told the club’s website.
Rivers United have now moved joint top of the NPFL standings with only goals difference separating them from the leaders, Plateau United, who have amassed 24 points from 13 games this season.
The Pride Of Rivers will next face Dakkada FC on Sunday as the competition enters Match Day 14.