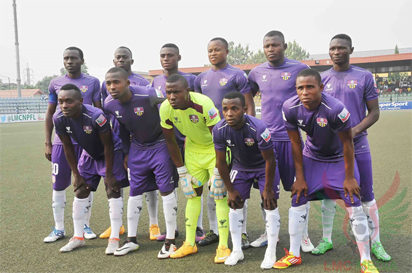 Mountain of Fire and Miracles FC have completed the double over Warri Wolves, courtesy of a goal each from Onyebuchi Ifeanyi and Clement Ogwu in Matchday 21 of the Nigeria Professional Football League decided at the Ozoro Stadium, Delta State.

The Olukoya Boys claimed their sixth away point of the season in the 21 week old NPFL, as they overpowered their hosts with an outstanding performance to complete the double following a 2-1 victory in the first fixture in Lagos.

The hosts began the exciting match with good attacking display and created few chances in the early minutes of the match, but they could not break the Lagos-based team solid defence.

After 24 minutes of action, Ifeanyi put MFM FC in front with a powerful header when he connected a well taken corner kick from Adeyinka Najeem.

Clement Ogwu doubled the lead for the Olukoya Boys in the 40th minute of match with an audacious strike.

MFM FC Interim Manager, Gabriel Olalekan, who was full of excitement could not but praise his charges for grinding out their first away win this season.

Olalekan said: “I’m very excited as you can see and I must give kudos to my players they were very impressive today and above all we give God the glory.

“It was a difficult game, Warri Wolves were very dangerous in the early minutes of the match, and they nearly get a goal as they tormented our defence with good attacking display, but my boys were able to soak all the pressure.

“Despite the fact we scored the two goals in the first half, Wolves came out strong in the second half and got a a couple of chances, but we were up to the task.

“We just have to build on this going forward, as we approach every game as they come.”

The Olukoya Boys have now move to 13th position on the NPFL table with 27 points from 21 league matches.

They will host Lobi Stars next week Sunday at the Soccer Temple, Agege Stadium.