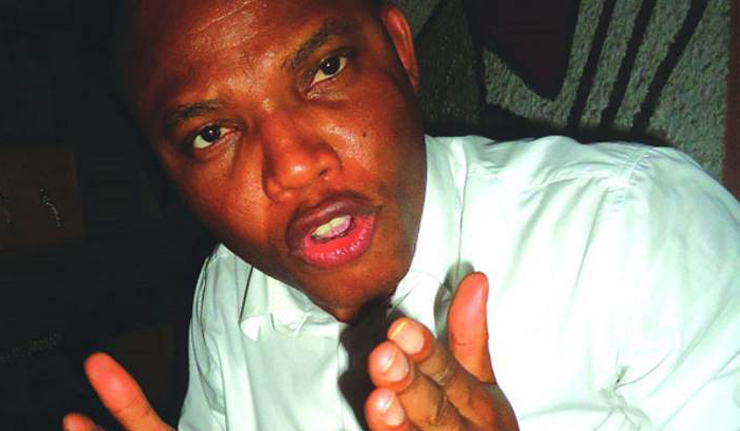 The leader of the Indigenous People of Biafra, Nnamdi Kanu, has said he was willing to enter into negotiation with the Federal Government to secure his release.
Kanu said this on Friday, adding that the negotiation could see to the end of the political crisis that has continued to trail his continued detention.
Kanu, who denied that he was working with some militant groups in the Niger Delta to unsettle the country, spoke through his lawyers, Ifeanyi Ejiofor and Amobi Nzelu, at a press briefing in Abuja on Friday.
He said he was not opposed to negotiation to secure his freedom from detention.
Ejiofor, however, said: “Kanu will not renounce his ideology, IPOB is bigger than him. He cannot say yes or no to renouncing it, but he is open to political resolution of the problem. Nobody has approached him for negotiation where he is kept.
“The issue of IPOB is beyond him, he is open to negotiation. We are not against discussion on this issue. A political solution will be easily achieved than legal solution but Kanu must be released unconditionally.”Speaking on recent insinuations that Kanu and MEND were negotiating with the Federal Government, Ejiofor said his client has no connection, contact, ties or any form of relationship with the members of MEND.
He said: “In the past few days, the media has been awash with news on negotiations going on between the Federal Government and the members of MEND, where our client’s name conspicuously featured. It is on that note that we wish to inform the general public that Nnamdi Kanu has no connection, contact, ties or any form of relationship with members of MEND.
“MEND has no implied, direct or express authority of Nnamdi Kanu to represent him or Indigenous People of Biafra in any purported negotiation going on between MEND and the Federal Government. The general public is accordingly advised to ignore, discountenance and disregard the falsehood being peddled by MEND. Nnamdi Kanu does not know them.
“Nnamdi Kanu welcomes genuine political solution to this case. The Federal Government does not need to sponsor their representatives to travel to far away Bayelsa State or the creeks of Niger Delta region in order to reach Nnamdi Kanu.
“They know where they kept him, which is easily accessible to them. Kanu has people of proven integrity and impeccable character who will negotiate on his behalf based on his demands when communication to this effect is established.
“The unfolding events in the polity has therefore, vindicated our long held view that Nnamdi Kanu is a political prisoner. We wish to reiterate that on Nnamdi Kanu’s total freedom is where we stand.”