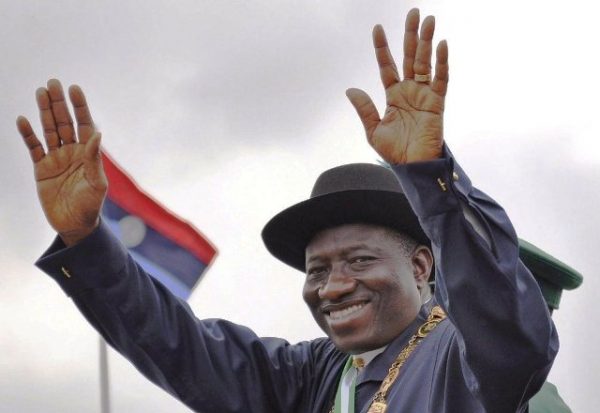 Former President Goodluck Jonathan said Nigerians still believed in the capacity of the Peoples Democratic Party to lead the country.
Jonathan stated this at the expanded National Caucus of the party held on Monday night at Wadata House, Abuja.
He said that this was demonstrated with reactions by Nigerians to the Supreme Court judgment on the party’s leadership crisis on Wednesday.
He urged that all efforts by PDP members and supporters within this period should be channeled towards building the party.
He said: “Nigerians still believe in the PDP because when the Supreme Court judgment was given, I was so surprised because some of people called and sent text messages to me.
“They are not even politicians, but they are so happy that PDP has come on stream because they were worried that PDP will go down.
“So, if people who are not even members of PDP are so happy that PDP has now gotten a platform to operate in spite of the negative propaganda against us, it means people still believe in PDP.
“PDP is a party that Nigerians still believe in.”
Jonathan appealed to party members to rebuild it, assuring that many people who stepped aside from the party as a result of its leadership crisis would return.
He said: “The first thing we need to do is to rebuild the party because when the party is strong, everything will be added to that.
“Whether you have individual or group interest, as a politician, you must serve.
“These are very basic things, but first and foremost, we must strengthen the party.
“Let us cooperate with the Caretaker Committee and make sure that PDP is very cohesive.
“And when that happens, people who stepped aside may step back.
“We may not even need to go on a voyage of discovery to discover people.
“But they themselves will come back because a strong party acts like a magnet.
“It will attract all the people that are interested.”
On his part, the Chairman of the PDP National Caretaker Committee, Senator Ahmed Makarfi, said only a miracle would stop PDP from regaining power in 2019.
Makarfi said the meeting was convened to chart the way forward for the party.
He said: “We call this caucus before the meeting of other organs.
“You are our party leaders.
“Immediately judgment was delivered, I said no victor nor vanquished and we mean it.
“It does not mean taking what belong to people and giving to a few people.”
On his part, Ayodele Fayose, the Chairman of the PDP Governors’ Forum and Governor of Ekiti State, urged party members and leaders to return to the “home” and mobilise Nigerians at the grassroots.
“If this party must win, if PDP must get the confidence of Nigerians, if this party must be restored, our leaders must go back home and work,” Fayose said.
The Deputy President of the Senate, Ike Ekweremadu, said that the Lord gave PDP the victory because He loved Nigerian.
Ekweremadu said the time had come for the party to work together and deliver good governance to the country.
He said: “Time to work is now; we must go back to the drawing board.
“We must not disappoint Nigerians.
“It is time for fence-mending and reconstructing Nigeria for real change.
“We all believe in the party that was why we stayed.
“We need everybody in this party to re-build the party.”
The Board of Trustees Chairman, Alhaji Jubril Walid, said it was time for the party to build a new Nigeria.
Walid, who was represented by Aminu Wali, said: “This is a new PDP.
“It is going to have a new beginning, a new start, by the grace of God.”
Present at the meeting were David Mark, Remi Bakare, Stella Omu, Godswill Akpabio, Nyesom Wike, Sule Lamido, Ahmadu Ali and also Uche Secondus.
Others were Olisa Metu, Jonah Jang, Jerry Gana, Grace Bent, Gabriel Suswam, Emmanuel Udom, Sen Ifeanyi Okowa, Emmanuel Iwuanyanwu and Darius Ishyaku
The other persons were Jonah Jang, Tom Ikimi, Vincent Ogbulafor, Ahmadu Ali, Jim Agbaje, Solomon Ewuga, Liyel Imoke, Ibrahim Mantu, Emeka Ihedioha, Dimeji Bankole.
Meanwhile, the former Chairman of the Party, Senator Ali Modu Sheriff, was absent.