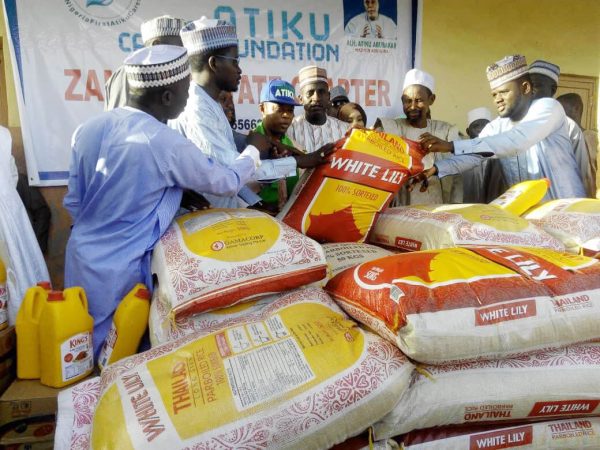 Former Vice President, Alhaji Atiku Abubakar, has said it is quite unfortunate that Nigerians are dying from preventable hunger.
According to a statement signed by the Director Media and Publicity, Atiku Care Foundation, North West Zone, Okpani Jacob Onjewu Dickson, Abubakar said this when he addressed Internally Displaced Persons in Marafa, Zamfara State on Thursday.
He said with proper planning and a robust  economy, the  farmers being displaced from their ancestral homes would have been there, contributing to the nation’s food security.
The Wazirin Adamawa, who was represented by the National Chairman, Atiku Care Foundation, Ambassador Aliyu Ibn Abbas, told them not to despair but hope for brighter days to come.
Abbas said the foundation is not for politics, but to touch lives of the less privileged.
He said Abubakar was worried that several times his assistance to the less privileged  was not reaching them, a development that informed the floating of the foundation.
He said: “Atiku was a nobody, his parents were nobody, but he grew against all odds to where he is today. You too can be somebody tomorrow.”
Abbas explained that this foundation has for the past three years been touching lives.
He described Abubakar as a man that is known for many things besides politics as he has like several businesses he has been running before becoming a politician.
He said: “There is hunger in Nigeria and people are yearning for someone, a true leader that would change the negative stories to positive.”
Abbas assured that if Abubakar is elected, the country would experience several positive changes.
The Chairman, Atiku Care in Katsina State, Hon. Aminu Kabiru, said they were there to sympathise with the IDPs on the unfortunate conditions they have found themselves.
The foundation’s Zonal Director, North West, Lawal Abubakar Zannah, said Abubakar observed and disappointed by happenings, he decided to assist.
Zannah appealed for them to pray for Nigeria to be peaceful and prosperous.
The Chairman of the IDPs, Alhaji Muhammadu Abubakar, thanked Atiku Care Foundation for the gesture on behalf of the thousands of beneficiaries.
Abubakar also thanked the Marafa community for taking them in and providing for them.
An IDP, Kabiru Idris, from Wunaka community in Zamfara  State, said he has been at the camp alongside his two wives and 10 children for four months.
Another IDP, Rukayya Adamu, who said she escaped bandits from Kukar Gandu with her five children, said they have been at the camp for three months.
Adamu also appreciated the noble gesture of Atiku Care Foundation.
All state chairmen from the North West geopolitical zone were present.
Items worth millions of Naira presented to the IDPs included bags of rice, cartons of  pasta, washing detergent, bags of semovita, gallons of oil and cartons of instant noodles.