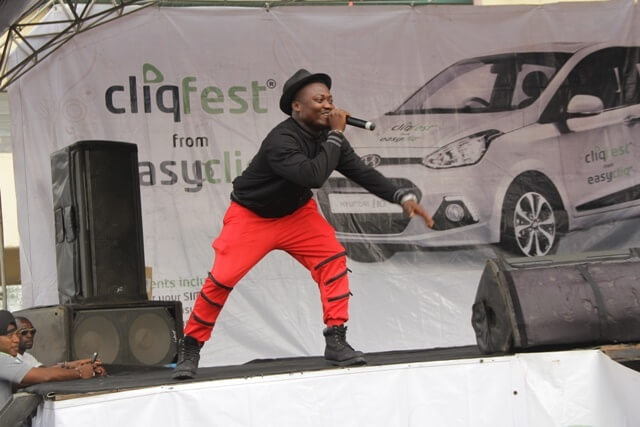 Nigerian Idol discoveries, Evelle, K-Peace, Eye-D and Dolu, recently brought alive good memories of the leading TV reality show when they took to the stage to perform at the just concluded Etisalat Nigeria’s Cliqfest, a youth-centric edutainment initiative held at the University of Calabar in Cross River State.
Leading the pack on the day was Nigerian Idol Season 5 Winner, Kunle Ogunrombi, popularly known as K-Peace, whose rendition of John Legend’s ‘All of me’ in Fuji thrilled the students to no end.
Ogunrombi topped his beautiful showing with his latest single: “Orire.”
The students were further treated to a wonderful display of vocal artistry and strong performance from the winner of Season 4, Evelle, real name Evelyn Zibili, who sang some of her singles such as: “I’m Naughty” and “Kilimanjaro” to great applause from the delighted students.
There were performances on the day from Dolu and Eye-D, both Nigerian Idol runners up for season 5 and 4 respectively.
Dolu reminded the crowd of her sonorous voice, which ruled the waves during her time on the Nigerian Idol show, with a rich rendition of Adele’s “Hello”.
Eye-D, like her successor, serenaded the crowd with her: “Pray for Nigeria” note, dedicated to the trying times the country is going through.
Like in other tertiary institutions that have experienced the Cliqfest storm since its debut, the students turned up in large numbers for the two-day event, which included a seminar by renowned motivational speaker, Niyi Adesanya, who dished out nuggets on how to succeed in the market place.
It also featured a football match, a rap music contest, dancing competition and a raffle draw where phones and laptops were won by the students.
The climax of the event was the emergence of Violet Ukama, a 400 Level student of Soil Science, as winner of the star prize, a Hyundai i10 car, in a raffle draw.
The Dean, Student Affairs of the University of Calabar, Prof. Eyong Ubana, said the university was grateful to Etisalat Nigeria for visiting the school and commended the company for taking a huge interest in Nigerian youth especially students of tertiary institutions.
The Manager, Youth Segment at Etisalat Nigeria, Idiareno Atimomo, remarked that Cliqfest is a platform that allows Etisalat to engage with its customers, while bringing them fun, entertainment and learning that they need.
Atimomo said: “Cliqfest takes us to 16 tertiary institutions annually – Federal and State Universities, Polytechnics and Colleges of Education. We do not discriminate because the youths are important to us; they are the future, and also rank as some of our best customers who are loyal to us. So this is our own unique way of showing our appreciation to them.”