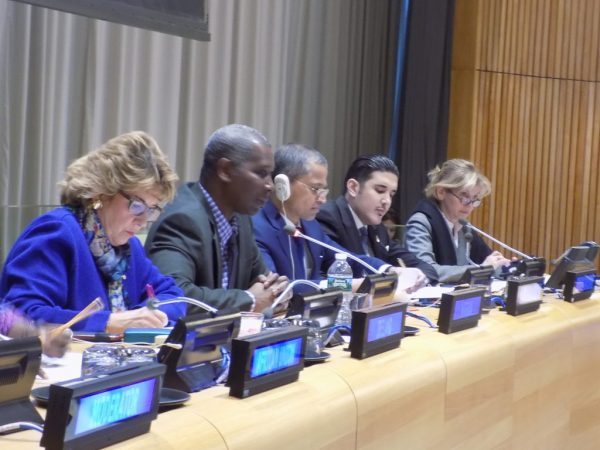 Share
Facebook Twitter LinkedIn Pinterest Email
Nigeria’s decision seeking a UN resolution to promote January 24 every year as the International Day of Education has been greeted with overwhelming support from all stakeholders at the UN headquarters in New York.
The News Agency of Nigeria reports that Nigeria organised a side event on Friday evening to promote the resolution on the Day, co-sponsored by Ireland, Singapore and Qatar, and the resolution is expected to be adopted next week.
Nigeria’s Ambassador/Permanent Representative to the UN, Prof. Tijjani Bande, in his remarks, noted the excitement that greeted the event from stakeholders, and commended the representation from all walks of life.
The Nigerian envoy said: “This is a pleasant day because there has been no one who has said on reflection that education is not deserving of a day to ponder over.
“Education, in terms of its liberation elements, the skills it provides, the sense of community, it should help us relate and have tolerance in the world; these elements, all agreed to.
“Clearly, there is a connection between educational attainments of countries and their development, including their peace. But then, I reflect on what matter it is that education is not implicated – hardly none.
“Of the SDGs – Sustainable Development Goals, I reflect, what exactly is it that will work without education? So, the relevance of education and its centrality to life itself is well understood.
“This day of reflection, which has brought all of us here, if it should have meaning, should galvanise us to support action to ensure that every human being has a right and that right is guaranteed and actualised for the education to the extent he or she is capable.
“And constraints, be they of class, of religion, of language, of location, should be of no consequence in giving support to all human beings to have education.”
Bande called on the UN, the Civil Society Organisations, religious leaders from around the globe and the private sector to facilitate the best way they could the guaranteeing of education to all citizens all over the world wherever located.
The Permanent Representative of Ireland to the UN, Geraldine Nason, commended Nigeria for leading the sponsorship of the resolution, noting the large turnout of stakeholders at the event.
Nason said Ireland was deeply committed to ensuring that education is upheld as a human right, recalling late Nelson Mandela’s assertion that “education is the most powerful weapon we can use to change the world”.
She said there was still extraordinary works to do to attain improved basic quality education, stressing the need to focus on the young girls who are marginalised educationally, and children in emergencies.
She said: “In my own country – Ireland – that looks like a very shining modern state, we launched our own development on the basis of the very deep profound commitment to education in our society.
“We like to say that we put our resources into our brains and nothing to our roads.”
The Permanent Representative of Singapore to the UN, Burhan Garfoor, wondered why nobody thought about sponsoring the resolution much earlier, and commended the Nigerian Permanent Mission for the initiative.
Garfoor expressed the confidence that the resolution would be adopted unanimously when it is brought to vote.
He said: “We look at the International Day of Education as a day of reflection, but more importantly, as a day of learning from each other because no education system in the world is perfect, every education system has to continually improve and adapt to the needs of its citizens.”
The Permanent Representative of Qatar to the UN, Alya Al-Thani, stressed that everyone should enjoy the human rights to education, and tasked member states to ensure access to education.
Al-Thani said: “The State of Qatar attaches great importance to the promotion of the rights to education for all as we are driven by strong belief in the transformation power of education for the attainment of all SDGs and bringing positive changes to society and lives of people.”
The Permanent Observer of African Union to the UN, Fatma Kyari-Mohammed, said AU recognised that “education is the most important tool for the continent to realise its destiny and to take its rightful place in the global community”.
Kyari-Mohammed said: “Our quest, therefore, is to find innovative approaches that can improve learning levels for variety of skills, including literacy, and of course, technology for the 21st century.
“African Union adopted a number of strategies that support education and innovation, namely: The Continental Education Strategy for Africa; the Continental TVET Strategy; and the Science, Technology and Innovation Strategy for Africa.”
Marie Roudil, Director, UN Educational, Scientific and Cultural Organisation, New York Office, regretted that 262 million children, adolescent and youth were out of school in 2017, representing nearly one-fifth of the global population of this age group.
Roudil said: “We will not succeed in steering our world toward justice, peace and shared responsibility for the future without a massive push for universal education.
“As the world celebrates the 70th anniversary of the Universal Declaration of Human Rights next month, it is worth recalling that the right to education is a crucial expression of the accountability upholding the SDGs 4 agenda.
“More than 217 million children and adolescent are not achieving minimum proficiency levels in reading and mathematics, adding only 60 per cent of primary school children completed primary school.”
Other speakers included Katherine Fleming, Provost, New York University; Dr. George Otte, Director, Academic Technology, City University of New York; Chief Temitope Ajayi, Chairman, Silicon Valley-Nigeria Economic Development; and Christo Thomas, Founder, Collegiate Congress New York.
NAN.
Burhan Garfoor Geraldine Nason International Day of Education Ireland New York Qatar SDGs Singapore Tijjani Bande un
Share. Facebook Twitter Pinterest LinkedIn Tumblr Telegram Email