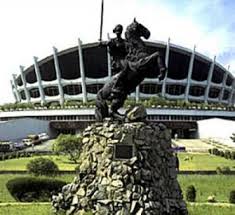 The National Association of Nigerian Theatre Arts Practitioners on Sunday honoured some thespians in the industry for their contribution to the growth of the arts in the country.

The event, which held at the National Theatre, Iganmu, Lagos, was celebrated against the backdrop of the “World Theatre Day 2015”, which was observed by NANTAP.

The News Agency of Nigeria reports that Bolanle Austen-Peters, the founder of Terra Kulture, Victoria Island, Lagos, was honoured as the WTD Distinguished Personality 2015.

The WTD, which was originally scheduled to hold in February, had to be postponed because of the national elections that held at the same period.

NANTAP Chairperson, Faith Eboigbe, told NAN that the honour that was conferred on the deserving honourees were done in appreciation of their meritorious services.

Eboigbe said: “It not easy finding space and putting up a performance in this country, hence arts is suffering and the practitioners as well.

“We want to seize this opportunity to call on government to put structures in place for the arts.

Meanwhile, Austen-Peters, who spoke on behalf of all the honourees, said Terra Kulture had to be established because there were few places in Nigeria with the requisite ambience, for rich cultural heritage.

Austen-Peters said: “It is a private sector initiative recognised as a cultural hub in Nigeria for expatriates, students Nollywood, Hollywood stars and members of the diplomatic corps.

“I want to keep expanding it to help to promote the theatre culture.”

She also thanked NANTAP for the recognition.