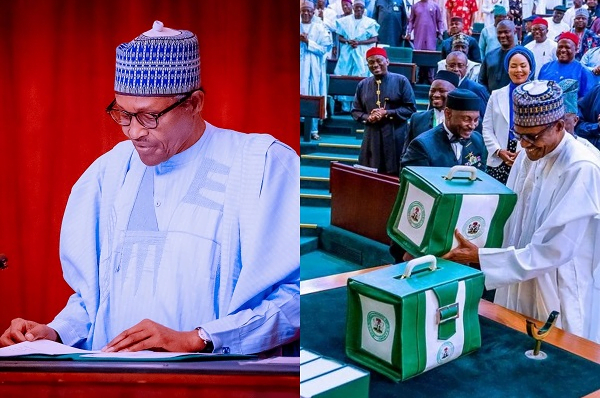 The implementation of the 2022 ‘Budget of Economic Growth and Sustainability commenced on the first day of the year and Nigeria’s debt position is “cautious”..

President Muhammadu Buhari revealed this Friday, while presenting 2023 Appropriation Bill to the joint session of National Assembly, saying despite this, it was necessary to forward an amended budget proposal  to address some exigent issues, especially the significant increase in fuel subsidy.

He told Federal Lawmakers that the amended 2022 Budget was based on a benchmark oil price of 73 US Dollars per barrel, oil production of 1.60 million barrels per day, and exchange rate of 410.15 Naira to US Dollar.

“As at 31st July 2022, Federal Government’s retained revenues was 3.66 trillion Naira, excluding the revenue of Government-Owned Enterprises. Thus, revenue collection was only 63 percent of our target, largely due to the underperformance of oil and gas revenue sources.

“Despite higher oil prices in 2022, oil revenue was below target due to significant oil production shortfalls and high petrol subsidy cost resulting from the significant rise in Crude prices which ultimately increased PMS prices worldwide.

“Oil output stood at an average of 1.30 million barrels per day as at June 2022, while the sum of 1.59 trillion Naira was spent on fuel subsidy between January and June 2022. The NNPC, working in collaboration with security and other relevant agencies, is putting in place additional measures to curb the incidence of pipeline vandalism and crude oil theft in order to meet our crude oil production quota” Buhari informed the NASS.

On the expenditure side, President Buhari disclosed that the sum of 8.29 trillion Naira had been spent by July 31 2022 out of the total appropriation of N17.32 trillion. Despite our revenue challenges, we have consistently met our debt service commitments, adding that staff salaries and statutory transfers have also been paid as and when due.

He related further that about 1.48 trillion Naira had been released to MDAs for capital expenditure as at the end of July 2022. I am pleased to inform you that we expect to fund MDAs’ capital budget fully by the end of the fiscal year 2022.

The budget text reads in part: “To further address structural problems in the economy and drive growth, capital releases thus far have been prioritised in favour of critical ongoing projects in the power, roads, rail, agriculture, as well as health and education sectors.

“As at the end of July 2022, the fiscal operations of the Federal Government resulted in an estimated budget deficit of 4.63 trillion Naira. This represents 63 percent of the estimated deficit for the full year. This is largely attributable to revenue shortfalls and higher debt service obligations resulting from rising debt levels and interest rates.

Buhari however opposed his critics on reckless borrowing, indicating that “debt position remains within cautious and acceptable limits compared to peer countries”.

“As at the end of June 2022, total public debt is within our self-imposed limit of 40 percent of GDP, which is  significantly below the 55 percent international threshold for comparator countries, and a global average of 99 percent post-COVID-19.

“Nonetheless, our debt-service-to-revenue rationeeds close attention. The current low revenue performance of government, as reflected in the lowly revenue-to-GDP ratio of just about 8 percent. Our medium-term objective remains to raise this ratio to 15 percent, at which the debt service to revenue ratio will cease to be a concern” the President stated.

Buhari said revenue shortfalls remain the greatest threat to Nigeria’s fiscal viability, revealing that his administration has accelerated efforts towards ensuring that all taxable Nigerians declare income from all sources and pay taxes due to the appropriate authorities.

He added that the FG was monitoring the internally generated revenues of MDAs to ensure they are appropriately accounted for and remitted to the Consolidated Revenue Fund.

Buhari established: “The 50 percent cost-to-income ratio in the Finance Act 2020 has significantly improved operating surplus remittances by Government Owned Enterprises (GOEs). I therefore solicit the continuing cooperation of the National Assembly in enforcing the legal provision and other prudential guidelines imposed on the GOEs during the consideration of the budget proposals of the GOEs.

“I am happy to report that the revenue collection and expenditure management reforms we are implementing are yielding positive results, with recent significant improvements in non-oil revenue performance. However, while we continue to implement revenue administration reforms and improve our collection efficiency, we urgently need to find new ways of generating revenue.

“As we seek to grow our government revenues, we must also focus on the efficiency of utilization of our limited resources. Critical steps we are taking include immediate implementation of additional measures towards reducing the cost of governance and the discontinuation of fuel subsidy in 2023 as announced earlier. We are however mindful of the fact that reducing government spending too drastically can be socially destabilizing, and so will continue to implement programmes to support the more vulnerable segments of society.

“Petrol subsidy has been a recurring and controversial public policy issue in our country since the early eighties.  However, its current fiscal impact has clearly shown that the policy is unsustainable. As a country, we must now confront this issue taking cognizance of the need to provide safety nets to cushion the attendant effects on some segments of society”.