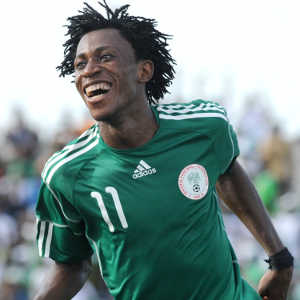 Ahmed Musa and Kenneth Omeruo, were back fully in training on Saturday afternoon, after initial fears about their possible readiness for the game against Spain Sunday afternoon.
The third player, who was on the injury list, Nnamdi Oduamadi, was already 60 per cent ready as at press time.
Oduamadi is expected to have a late fitness test on Sunday morning ahead of the game and indications are that he would be ready for the match.
Head Coach, Stephen Keshi, who happy with the cheering news, thanked the medical crew for a job well done.
Keshi told the world media that he expects all his 22 players will be fit, while regretting the absence of Lazio midfield man, Ogenyi Onazi, who was out due to injury prior to the tournament.
The Eagles last training session at the venue of the game was mild and easy, as the coaching crew decided to take it easy with the players to avoid any knocks from any quarters.
Keshi said the game is like a World Cup final to the Eagles, as he expects his boys to take the fight to the World and
European champions.
He said: “We respect Spain but we don’t fear them and I think as African champions we deserve some respect ourselves.
“But we will give the game our all and hope it would be enough to take us to the next stage of the tournament.”