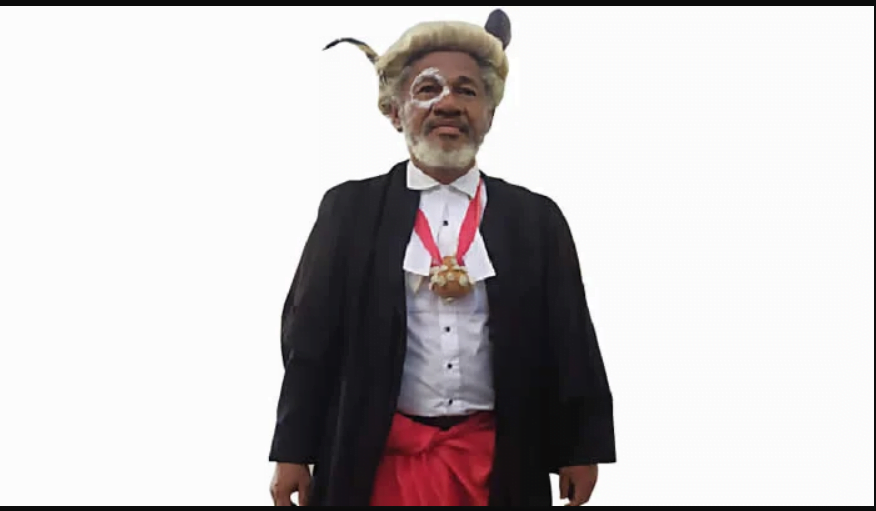 The advice followed the appearance on Friday by Omirhobo at the Supreme Court in Abuja in a traditional attire.

Omirhobo told newsmen that he is an ardent worshipper of Osun, the water goddess.

He said following the ruling of the Supreme Court on the use of hijab in schools, it ultimately meant everyone was free to wear whatever depicts their religion to their places of business.

Reacting to the development on Saturday, MURIC in a statement by its Director, Prof. Ishaq Akintola, said the lawyer’s behaviour was not only contemptuous of the Supreme Court pronouncement, but also provocative, condescending and irreconcilable with the noble profession of law.

It said: “A lawyer, Malcolm Omirhobo, yesterday appeared at the Supreme Court dressed like a traditional priest (https://www.blueprint.ng/video-moment-human-rights-lawyer-caused-stir-at-supreme-court/, https://barristerng.com/breaking-supreme-court-forced-into-recces-as-lawyer-malcolm-omirhobo-appears-in-court-wearing-juju-priest-attire-to-protest-hijab-approval/).

“Mr. Omirhobo claimed that he was reacting to the Supreme Court judgement on hijab of Friday, 17th June, 2022 which approved the wearing of hijab to school by female Muslim students.

“Going by his personal record, we are not in any way taken aback by what Omirhobo did yesterday. The lawyer has exhibited pathological hatred for Muslims, their religion and the language of their faith in the past.

“Was it not the same Omirhobo who went to court over the existence of Arabic letters on naira notes? He did not stop there. He challenged the use of Arabic on army logo. He also sued the Nigerian Police for approving hijab for police women in Nigeria.

“Omirhobo has behaved to type. If he has his way, he would have every single Muslim Shugabad out of Nigeria. He hates the sight of Muslims, their Qur’an and the language of that Holy Book, Arabic. His hatred reached boiling point when the highest court in the land approved the use of hijab for female students.

“This pushed him to the extreme behaviour which millions of Nigerians saw him manifesting on television yesterday. Instead of licking his wounds privately and gently after the court gave victory to the Muslims, he took his anger and frustration to the Supreme Court.

“Omirhobo’s hocus-pocus is not only contemptuous of the Supreme Court pronouncement but also provocative, condescending and irreconcilable with the noble profession of law. It is bigotry fanned by the embers of hatred. Instead of bowing to the rule of law, this lawyer sought to make a mockery of the judgement of the highest court in the land. He challenged the rule of law. It was reckless, lawless and unethical.

“MURIC calls the attention of respected unions and authorities in the legal profession like the Nigerian Bar Association (NBA), the Body of Benchers, etc to the behaviour of Omirhobo. If this goes unnoticed, it should not go unpunished. If this goes unnoticed and unpunished, then there is no hope left for the hoi polloi and law abiding citizens in the Nigerian judiciary.

“Whereas some miscreants hide under the canopy of Islam to kill, maim and destroy properties, young Muslim students in South Western Nigeria have tolerated insults, abuses, intimidation, coercion and even corporal punishment without raising a single finger, not even once.

“All these because they demanded their Allah-given fundamental human right and their civil liberty to wear hijab as enshrined in Section 38(i) & (ii) of the 1999 Constitution of the Federal Republic of Nigeria. They patiently exhibited forbearance of the humiliation for more than sixty years.

“Instead of holding demonstrations and disturbing the flow of traffic, instead of towing the path of violence, they elected to follow the path of litigation. The journey in the law courts have lasted about nine years but these children waited patiently until the highest court in the land made its supreme pronouncement.

“Alas who did we find mocking the judgement? Who did we find rebelling against the wisdom of the highest court of the land? A learned, a robed lawyer in voodoo garb! If this is not the height of impunity, then we do not know what else to call it. We will be shocked to our marrows if the relevant authorities do nothing about this. It will be an invitation to lawlessness if Omirhobo is allowed to get away with this.

“We have no doubt, however, that this attempt to ridicule the judgement of the Supreme Court on hijab will fail. What happened to all the gymnastic namby-pamby and articulated razzle-dazzle that followed the approval of hijab by an Oshogbo high court years ago?

“The Christian Association of Nigeria (CAN) instructed Christian students to wear Sango, Obatala, masquerade, church choir garments, etc to school and they actually did. But MURIC told them at that time that it would not last. We said they would soon get tired of it. Well, did it last? Yet hijab is still being worn by female Muslim students in Osun State today without being challenged. So we know where Omirhobo’s acrobatic razzmatazz is coming from. He has failed already. Divine truth will always overwhelm social truth.

“Chief Omirhobo, we love you. But the issue remains whether or not you love yourself. If indeed you love yourself, accept the Supreme Court judgement on hijab in good faith. Stop desecrating the much revered law profession. Those of us who are not learned should not be the ones teaching you to respect the rule of law.

“If you so wish, continue to wear your Babalawo lawyer dress to court everyday. Wear it everywhere (to the supermarket, hairdresser’s shop, petrol station, etc) the same way Muslim women have been wearing their own hijab’ and see the reaction of your personal friends. A word is enough for the wise.”