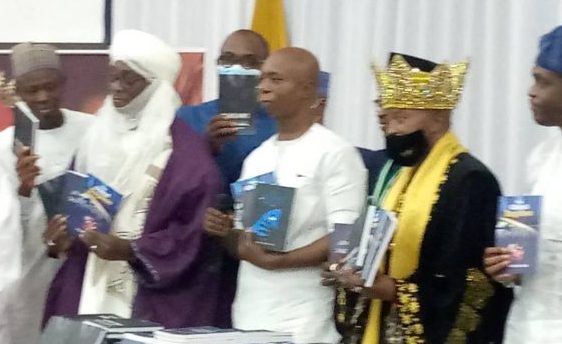 The Oluwo of Iwoland in Osun State, Oba Abdulrasheed Akanbi, on Saturday urged the Federal Government to initiate laws that would ensure capital punishment for convicted corrupt officials and ritual killers.

The paramount ruler gave the advice in Abuja at a public presentation of four books authored by a legal practitioner, Aminu Alilu, a Prosecutor and Head, Complex Case Group in the Federal Ministry of Justice.

The Oluwo, who commended President Muhammadu Buhari for his vigorous campaign against corruption, said the country’s dying health system, among others, was as a result of corruption.

According to him: “President Buhari is the only one standing because I know he never stole any money.

“I commend President Buhari-led administration for creating a vigorous awareness against corruption.

“We want more from His Excellency; an enforcement of capital punishment for corrupt officials is enough to place Nigeria at the verge of developed nation.

“Without such effective management of the country’s resources will always be questionable.

“Mr. President, we need enforcement of death penalty for the corrupt officials.”

Oba Akanbi equally urged the youth to assist his monarchical teaching committed to checkmating corruption in the traditional system.

The traditional ruler, who condemned the increasing rate of ritual killings in parts of the country, called on the government to legislate a capital punishment for ritual killers.

He said: “Ritual killing is prevalent and consume more innocent souls than Boko Haram and banditry.

“Private parts of women, men, children are harvested; people are killed on a daily basis by these ritual killers all because of money.

“It is anti-human.”
He enjoined the youth to refrain from cultism, while tasking Nigerian authors to create awareness in their literary work to curtail the menace.

Akanbi urged the Ministry of Justice to be the vehicle through which appropriate laws and legislations are made to stamp out corruption and criminal activities in the system.

He urged Nigerians to love one another irrespective of religious, ethnic or political difference.

He added: “It is time for Nigeria to be detribalised.

“God gives us the diversity to strengthen our togetherness and not to divide us.

“Our grievances can be politely presented without destruction of our legacies.

“While we plea to government to review barbaric policies not in tune, | personally appeal to Nigerians mostly the youth to be civic in their demand.”

Akanbi, who commended Alilu for writing the books, said: “Authors are generational builders.

“I have met many authors but I have not met any who wrote four books at a time.

“Aminu is a poet, playwright, a novelist and an aphorist.”

He said not only that he came up with the intellectual property at a time when the country and its men were struggling to survive the aftermath of COVID-19 pandemic, but “it is a pure indication that great men are always without excuse.”

The Attorney General of the Federation and  Minister of Justice, Abubakar Malami, also commended the author of the books.

Malami, who was represented by the acting Permanent Secretary in the ministry, Mohammed Umar-Etsu, recommended that the books should be incorporated in the curriculum of the country’s school system.

The author of the books, Alilu, said he decided to write them in order to make positive impact in the country.

He urged upcoming writers not to be discouraged about how lucrative literary work is but the impact it would make in the society.

The News Agency of Nigeria reports that the four books: The Wise Man’s Scripture, Arrows in the Shadow, The Tongue of Silence and The Global Bugaboo, did not relate with legal matters.