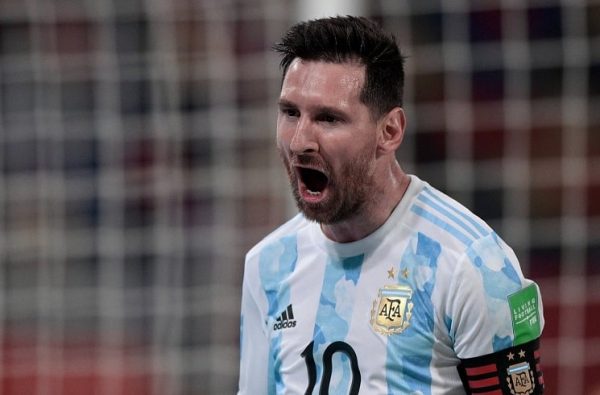 Argentina have rounded off their 2022 World Cup preparations in style courtesy of a comfortable 5-0 friendly victory against United Arab Emirates in Abu Dhabi on Wednesday.

An early opener from Julian Alvarez and a brace from Angel Di Maria put the two-time world champions in control.

This was before Lionel Messi added a fourth ahead of the half-time whistle.

Joaquin Correa then came off the bench to net Argentina’s fifth midway through the second half and wrap up a commanding victory for Lionel Scaloni’s side.

Argentina will now head to Qatar on a real high as they have extended their remarkable unbeaten run on the international stage to 36 matches across all competitions.

Scaloni named a strong starting lineup at the Mohammed Bin Zayed Stadium and it took just 16 minutes for his side to open the scoring, with Messi beating the offside trap before teeing up Manchester City forward Alvarez to tap in from close range.

Argentina doubled their lead just eight minutes later when left-back Marcos Acuna floated a cross into the penalty area towards Di Maria, who expertly placed a sweet left-footed volley into the bottom corner.

Di Maria then dazzled his way into the box between two UAE defenders before rounding goalkeeper Khalid Eisa and tapping into an empty net to put La Albiceleste three goals in front.

Messi capped off an impressive first-half showing when he shifted the ball onto his weaker right root before firing across the face of goal into the top-left corner.

UAE also rang the changes before Enzo Fernandez came on for just his third international appearance six minutes into the second half, replacing goalscorer Alvarez.

Indeed, Correa made an instant impact off the bench and he netted Argentina’s fifth on the hour mark with a deflected finish into the far corner after Rodrigo De Paul skilfully played the Inter Milan man through on goal.

In a game which saw Messi, De Paul, Lisandro Martinez, Juan Foyth and Emiliano Martinez all play the full 90 minutes, Argentina’s dominance was ultimately too much for UAE and the 2021 Copa America holders came out on top in emphatic fashion.

Argentina now have six days to prepare for their World Cup opener in Group C against Saudi Arabia next Tuesday, before taking on Mexico and Poland later this month.