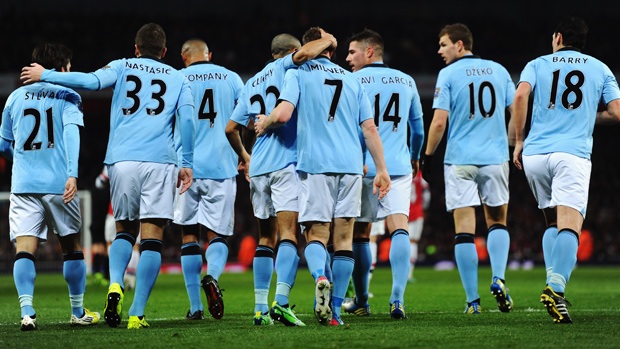 Samir Nasri and Vincent Kompany scored the goals as Manchester City reclaimed the Premier League title with a comfortable 2-0 win over West Ham.
The goals came in a 10-minute spell which straddled the half-time interval at the Etihad Stadium, rendering nearest rivals Liverpool’s win against Newcastle academic.
With City having a two-point advantage that was always a long shot and there was never any hint that the nerve-jangling final-day drama of their title win two years ago would be repeated.
City approached the game with the confidence of a side that were comfortable and in control of their destiny.
The hosts appealed unsuccessfully for a penalty early on after Mark Noble deflected a Pablo Zabaleta cross onto his hand.
Their first real chance came after David Silva and Aguero combined well on the edge of the box. Yaya Toure’s initial effort was blocked before Silva volleyed over from a Zabaleta cross.
Nasri then had a good cross turned behind and Toure curled a shot narrowly wide as news filtered through that Liverpool had fallen behind in their game against Newcastle.
City maintained the pressure, with Aleksandar Kolarov forcing Adrian to tip over a powerful drive from distance.
Nasri finally broke through six minutes before the interval as he took aim from 20 yards and struck a powerful low shot which went in off the post after a possible touch from Adrian.
City fans then increased the volume significantly and Aguero glanced a header wide before Silva saw an effort deflected onto the bar off Carroll.
City truly got the party started four minutes into the second half when Kompany stabbed home from six yards after Edin Dzeko won the ball from a corner.
The City captain celebrated with unconfined joy.
Aguero had two opportunities to extend City’s lead but headed wide at the near post and then failed to connect in front of an open goal from a Zabaleta cross.
Aguero appeared to pick up another knock in the closing moments and he showed his frustration by bundling over Noble off the ball.
That sparked an unecessary scuffle between several players of both sides and Aguero was eventually booked, but it could not dampen City’s celebrations.
They knew the job was completed and the hosts duly played out the closing minutes with little alarm to prompt a pitch invasion and jubilant scenes.