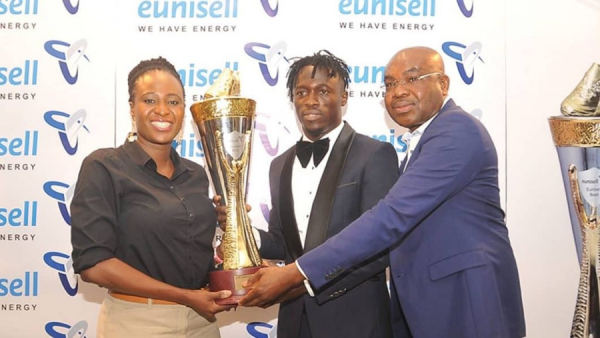 Nigeria international footballer, Junior Lokosa, on Wednesday in Lagos applauded Eunisell for their commitment to the Nigeria Professional Football League and for being behind his dramatic change of fortune.
The News Agency of Nigeria reports that Eunisell launched the prestigious Eunisell Boot Trophy Award in 2018 and it was awarded to the NPFL’s highest goal scorer in a season.
Lokosa, 25, the inaugural winner, with an impressive 19 goals scored in 2017/2018 season, was presented with the trophy and a cheque for N3.8 million at N200,000 per goal.
The company said that the media hype around Lokosa’s award caught the attention of African Champions Club, Tunisia’s Esperence Sportive that recently signed the Kano Pillars star.
Lokosa had previously travelled to China and Norway seeking club contract, but walked away without securing a deal.
He said: “It was only after the Eunisell Boot award had been made along with all the publicity, that my career turned a corner.
“There can be no doubt that the award will spur young, aspiring players and Nigerian league footballers to perform at a much higher level — the rewards are real.
“Eunisell firmly believes that rewarding the Top Flight League’s players will improve the standard of football, increase the fan’s focus on the league and create sports employment opportunities for future generations.
“Interestingly, several stars are already in the race for The Eunisell Boot for 2018/2019 season, including Heartland’s Chinonso Okonkwo who is ahead of the pack with three goals at the conclusion of Match Day 6 proceedings.”
NAN reports that Eunisell started business in 1996 in Nigeria, dealing with the supply of key oil fields chemicals.
The company completed the construction of its Central Processing Facility on Marginal Field for Network E&P on OML in Qua Iboe.
Eunisell became the official shirt sponsor for Sharks F.C. Porthacourt in Nigeria in 2015.