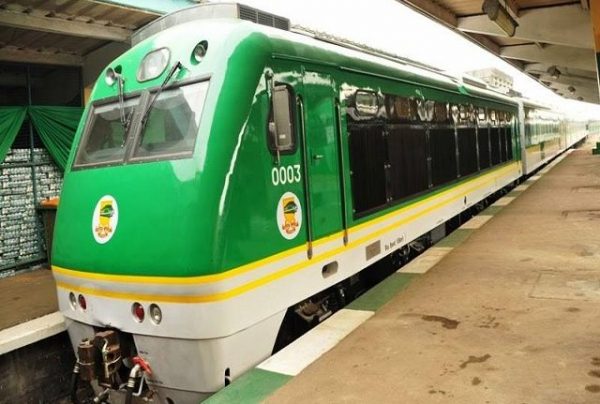 The Nigerian Railway Corporation on Tuesday said capacity remained the major challenge facing the operation of the Lagos-Ogun Mass Transit Train Services.
The Lagos Railway District Manager, Jerry Oche, made this known in an interview with the News Agency of Nigeria in Lagos.
Oche said the Federal Government was working hard to increase the rolling stocks to meet the demand by commuters.
He spoke against the backdrop of congestion of MTTS observed by a NAN correspondent who monitored the service.
He said the corporation was not resting on its oars to meet the demand of the teeming commuters in the state.
Oche said: “Our biggest challenge right now is capacity.
“To start with the MTT (Mass Transit Trains) as it is, when we look at our statistics, we are doing extra 50 to 60 passengers per coach.
“That, for me, is not good.
“If we have extra 50 people per coach in a train, that is congestion.
“You can imagine how people will stand.
“This is a big issue and that is why we introduced second train.
“That will not solve our problem, but it will reduce our problem.”
Oche noted that excess passengers on trains would not give room for comfort and the ticket checkers would not be able to move round and check those who might have boarded the train without tickets.
He said since the resumption of operations after the break, there had been many applications for freight services.
He said: “We are trying to see how to hit the ground running without messing up our timetable because we want to work strictly with our timetable.”
Oche noted that the Federal Government was working hard to increase capacity for both passengers’ trains and freight services.
He said train remained the cheapest and most comfortable means of transportation.
He said the demand for train services had been higher but the corporation was working to meet the demand.
Oche said: “Don’t forget before we shut down in September 2019, we were doing three trips and we were doing DMUs (Diesel Multiple Units) train.
“We resumed with just one trip and we just added the second one.
“Definitely there will be congestion.
“We are ready for the freight shuttle and we are ready for the passengers’ trains.”
Oche said the corporation was putting necessary machinery in motion to ensure that the DMUs commence operations soon.
NAN reports that the NRC resumed operations on January 23 with one-return-trip daily after about four months of suspension of work to fast track the completion of the new standard gauge.
The corporation on February 19 added another train to increase the number of trains in its MTTS to two daily to reduce congestion that has been characterising the MTTS.
NAN.