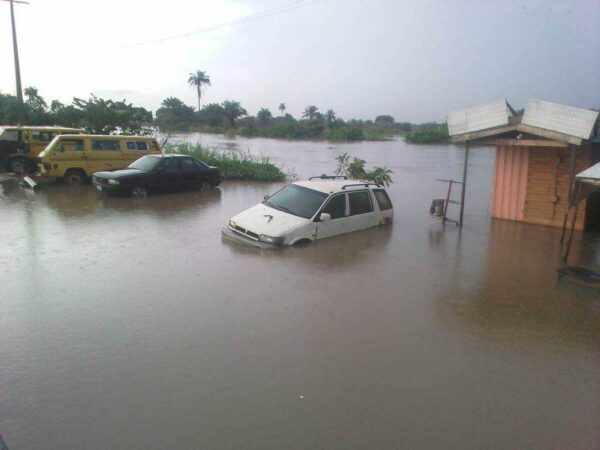 The Federal Government, through the Ecological Fund Office, on Friday inspected areas affected by recent flooding in Kosofe area of Lagos State with a view to assisting the sacked communities.
Ibrahim Lawal, who led the Presidential Team for an on-the-spot assessment of the flooded communities, said the visit followed complaints by Senator Bayo Osinowo, representing Lagos East Senatorial District.
Lawal said: “We are here on investigation.
“Senator Bayo Osinowo is the one shouting that water is killing his people.
“We have come on ground to see the damage.
“We came to put up an assessment and situation report.
“He complained about erosion and flood problems in his domain.
“We are coming up with a report so that we can have lasting solutions.
“After then, the senator will follow up the report for approval so that the communities can benefit from the ecological funds’ intervention.
“The assurance we are given to the residents is that government will intervene. Government is for the people.”
Assessing the disaster, Lawal said the flooding was huge but assured that the government would intervene very soon.
The Chairman, Agboyi-Ketu Local Council Development Area, Dele Osinowo, told newsmen that the flooding had brought untold hardship and suffering to residents.
According to Osinowo, when water overflows from Ogun River Basin, several communities in the LCDA suffer and are displaced, hence the need to save lives of residents from hardship.
The council boss, who commended Senator Osinowo’s coming to the aid of the people, urged the Federal Government to find a lasting solution to flood disaster in the area.
He called on the Federal Government to partner with state and local councils to provide temporary shelter for residents of the affected communities before dredging and construction of embankments.
He said: “In some of these communities, students can no longer access schools.
“Many students have been out of school for over two weeks now.
“The continued downpour does not also help at all.
“The Ogun-Osun River Basin is affecting us very seriously here.
“The water actually flows all the way down to our communities and has taken over all the property, schools and businesses.
“The flood has submerged many businesses, lives and property.
“The government should come up with a solution.
“We know it is going to cost FG a lot but people’s lives and economy matter a lot.”
Listing some of the affected communities, the chairman said the flood had affected Isheri Olowora, Isheri North, Odo Ogun community, the whole Owode-Ajegunle, Itowolo, Agiliti and Ogudu among others.
His counterpart from Ikosi-Isheri LCDA, Abdufatai Ayodele, also thanked Senator Osinowo for rising up to the occasion.
Ayodele, who urged the Presidential Team to come to the aid of the communities affected by the flood, said the situation called for urgent intervention by the Federal Government.
Speaking to News Agency of Nigeria at Magodo Orisa in Isheri area, Pastor Jegede Ilesanmi, Chairman, Landlords Association, said the whole community had been sacked by flood and people could not go in or come out of their houses.
Ilesanmi, who noted the disaster started after Ogun River Dam was opened, urged the government to expedite action and rescue the affected communities.
NAN reports that team visited several flood affected communities in Ikosi-Isheri and Agboyi-Ketu LCDAs.