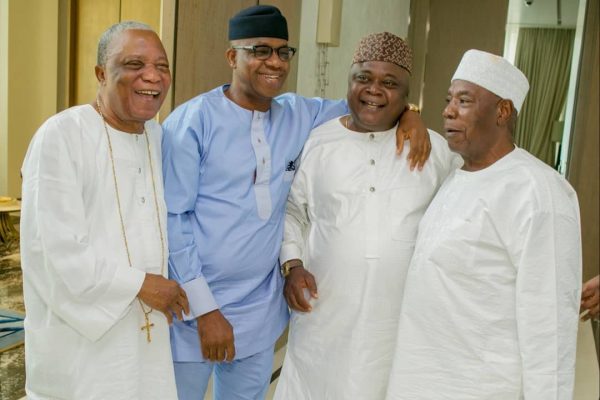 The Governor-elect of Ogun State, Dapo Abiodun, has reconciled with a governorship aspirant of the Peoples Democratic Party, Ladi Adebutu.
The reconciliation was said to have been arranged by the father of Ladi Adebutu, Chief Kessington Adebutu.
It could be recalled that Adebutu’s governorship bid hit the rocks when the Court ruled that Buruji Kashamu is the candidate of the PDP before the March 9, 2019 governorship election.
The development forced, Ladi Adebutu to form an alliance with the governorship candidate of Allied Peoples Movement, Adekunle Akinlade.
But Adebutu’s father disowned the alliance, saying he is against the parley between Akinlade and his son.
However, a photograph on Monday confirmed the reconciliation of Abiodun and Ladi Adebutu.
The photograph was on the Twitter handle of Abiodun.