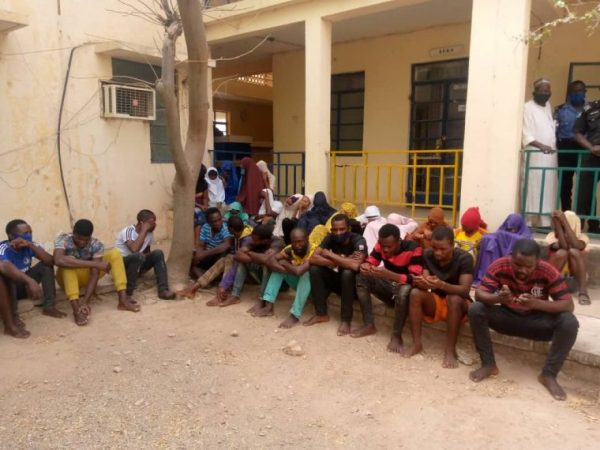 The Katsina Police Command said its men on March 16, 2021 raided a hideout of human traffickers at Kwangolom village, a location between the Nigeria and Niger Republic border, and rescued 30 victims of human trafficking, consisting of 12 males and 18 females.

The Commissioner of Police in the state, Sanusi Buba, revealed this on Wednesday at a press briefing conducted on his behalf by the Police Public Relations Officer, SP Gambo Isah.

The Commissioner of Police said efforts are on to arrest the agents and other members of the syndicate.

Baba also disclosed that the command on March 17, 2021 arrested one Hassan Magu, alias ‘Dan Giwa, 20 and Salisu Lado, alias Yeroji, 25, both of Zango village, Kankara Local Government Area of Katsina State, who are notorious bandits and members of a kidnapping for ransom syndicate terrorising Katsina, Zamfara and Kaduna States.

Similarly, he said the command on March 18, 2021 arrested the duo of Bilyaminu Mamman, M, 30, of Unguwar Bika village and Halliru Abubakar, M, aged 35, who specialised in giving information to bandits in the forest.

Buba further said the command on March 22, based on a tip off, arrested one Nuhu Bawale ‘m’, 26, a dealer in Indian hemp and also an impersonator.

He said the suspect confessed to the crime, which led to the arrest of his supplier, one Hamisu Lawal, ’m’, 29.

The Police Commissioner also spoke about the efforts of the men of the state police command in arresting alleged looters who took advantage of the Katsina Central Market fire incident, broke into shops and stole items.