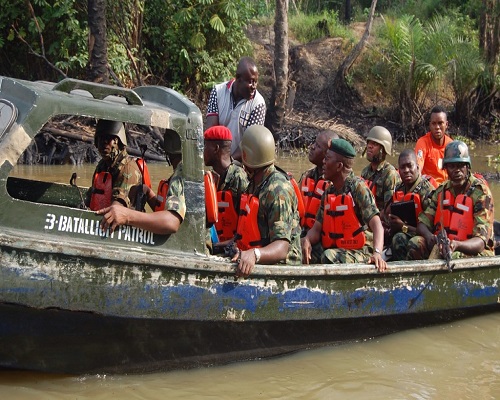 Operatives of the Joint Task Force, also known as Operation Delta Safe, said on Thursday that they have discovered 23 decomposing human skulls and a human skeleton during raids on militant camps belonging to suspected members of the Bakassi Strike Force in Bakassi and Akpabuyo Local Government Areas of Cross River State.
This was disclosed in a statement issued on by the Coordinator of the Joint Media Campaign Centre, Operation Delta Safe, Lieutenant Colonel Olaolu Dauda.
The statement said the camps, located at Ikot Ene Idem, Abakpa and Ikang Inam communities in the Bakassi and Akpabuyo councils of the state, were destroyed on Wednesday.
The statement also said that 44 suspected members of the Indigenous People of Biafra were arrested during the inauguration of the Bayelsa State chapter of the group.
It said the arrested suspects were apprehended at Lakeview Club, along Mabinton Estate, Okaka Road in Bayelsa State, while trying to disrupt public peace.
The statement reads: “In fulfillment of Operation Delta Safe’s mandate to rid the Niger Delta region of crude oil theft, sea robbery, all forms of criminality and protection of oil and gas facilities, on October 26, 2016, troops of Sector 4 in Cross River State, acting on a tip-off, carried out raids of Ikot Ene Idem, Abakpa and Ikang Inam communities in the Bakassi and Akpabuyo local government areas.
“During the cordon-and-search operations, troops discovered four militant shrines with 23 human skulls in various stages of decomposition, a complete human skeleton and several other human body parts. The shrines were destroyed as troops continued the search for the perpetrators of these heinous acts against humanity.”