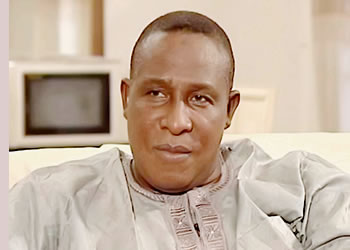 Yoruba popular actors, Prince Jide Kosoko and Adebayo Salami, better known as Oga Bello, are leading a few other leading actors in the Yoruba movie industry to form a new group tagged: Theatre Arts and Movie Practitioners Association of Nigeria, to serve as the umbrella body for actors and actresses in Nigeria.
The aggrieved members of the Association of Nigeria Theatre Arts Practitioners, formed the new group after a Federal High Court in Ibadan, Oyo State pronounced Comrade Victor Ashaolu as the new president of the ANTP.
The new association emerged on Sunday after six hours of crucial meeting in Ikorodu, Lagos State, The Eagle Online was informed.
Also at the meeting were major marketers in Idumota, Lagos State, leading directors and producers in the Yoruba movie genre.
The former two past presidents of the ANTP, Kosoko and Salami, were said to have been instrumental to the formation of the group.
Further checks by The Eagle Online have it that they have set up a National Working Committee charged with the responsibilities to, among other functions, see to the registration of the association with the Corporate Affairs Commission.
The list of members in the various states forwarded to The Eagle Online include Dele Ayobiojo, Rasaq Aberugba, Debo Alexandra, Toafeek Azeez and Funmbi Akinduro, who are all members of the Lagos State chapter.
Their Oyo State counterparts include Rose Odika, Rasaq Olayiwola, Jide Akinmade, Moses Ogunkola and Jelili Adebayo.
The Ogun State chapter parades Bolajo Amusan, Adesina Adesanya, Yemi Adegunju and Kayode Akindina as members.
In Ekiti State, the team is made up of Jide Fatimehin, Titi Fasuwon and Afon Ikole.
In Ondo State, Fakemi Ologbese, Deji Ikulayole, Muyiwa Olawolu, Sunday Agbaje and Tope Faturoti made the list.
The National Working Committee members, according to the statement made available to The Eagle Online include Yemi Solade, Ebun Oloyede, Toyosi Adesanya, Ronke Ojo, Yomi Fash Lanso, Akeem Alimi, Femi Adebayo, Feso Oyewole and Lanre Odeajo.
The league of the special advisers appointed for the new association is made up of Yinka Quadri, Lanre Hassan, Prince Jide Kosoko, Adebayo Salami and Adewale Rasaq.