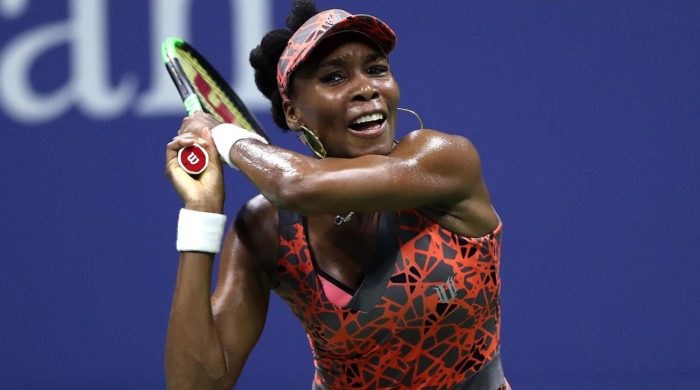 Japanese teenager Naomi Osaka handed out a comprehensive defeat to Venus Williams in the second round of the WTA Hong Kong Open on Wednesday.
Osaka knocked out the 37 year-old Venus 7-5, 6-2.
Japan’s top-ranked player reeled off eight consecutive games at one stage to power into the quarter-finals.
It all seemed to be going to plan for second seed Williams when she broke the 19-year-old Osaka in the fifth game of the opening set.
But then the American’s first serve deserted her when serving for the set at 5-4.
Two double faults and a series of fierce ground strokes from Osaka which unerringly kissed the lines enabled the world number 64 to break twice and take the set 7-5.
“She played well,” a disappointed 37-year-old Williams told reporters.
“You know, I made a few errors at 5-4 and after that she played pretty flawless. I can only give her credit.”
Osaka, who made headlines when she knocked Angelique Kerber out of the US Open in the first round last month, continued in the same vein at the start of the second set and raced into a 5-0 lead.
“I felt like I played offensively and hit really deep hard balls but she had the luck today and could return those balls even harder and deeper,” said Williams.
Williams briefly rallied to 5-2, but after a pep talk from Osaka’s coach, the Japanese refocused and closed out the match on her serve at the second time of asking after an hour and 24 minutes.
“Venus is someone I’ve respected and admired,” said Osaka, who was not born when Williams reached her first Grand Slam final at the 1997 US Open.
“I’ve grown up watching her. Even though she someone I admire, it’s just another opponent at the end of the day so I tried to focus hard.”