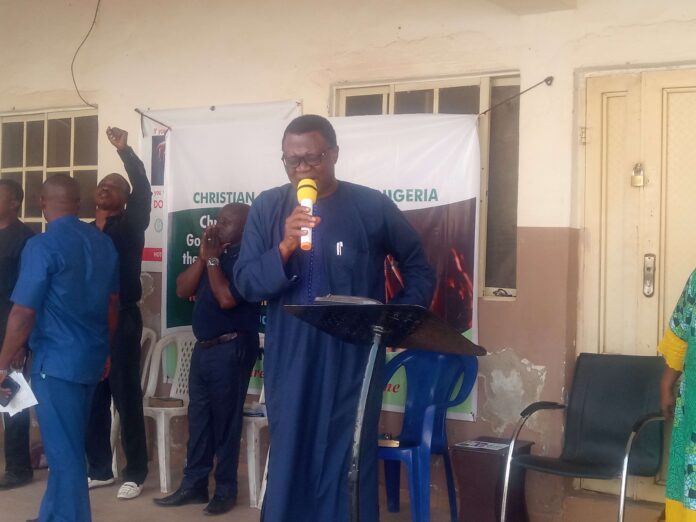 The Governor of Niger State, Abubakar Sani Bello, on Sunday disclosed that “the reason why we have turned to God for intervention over the insecurity challenges is because all efforts, including security, have failed”.
While asking religious bodies to stand in the gap and pray against the insurgency that have bedevilled the state, Bello said: “We have spent more on security but the situation still persists.”
The special prayers organised by the government, held at the Christian Association of Nigeria Secretariat, was led by the State Chairman of CAN, Rev. Mathias Echioda.
It had believers and government representatives in attendance.
It should be recalled that the Governor was at the Minna Central Mosque alongside Muslim Ummahs on Saturday, where he said government has put in place a robust action plan that will completely eradicate activities of armed bandits.
The Governor, who was represented by the Commissioner of Mineral Resources, Sunday Kolo, on Sunday, tasked Christians in the state to pray and ask God for intervention on the security challenges and to pray for those in troubled local government areas.
According to Kolo: “The situation of security is critical and Mr. Governor knows this because the more he spends more money the worse it becomes and so he (Governor) resolved to prayers and called on all Nigerlites to cry to God to intervene and grant us victory.
“Even the security agencies cannot curtail the challenges anymore.
“And so, we will not relent in prayers until the situation comes to normal.”
Echioda commended the state Governor for realising the importance of God’s power, saying: “Prayer is a very potent tool to succeed.
“If the Government says it can’t handle it anymore, who else can do it except God?”
Furthermore, Echioda hailed the introduction of Vigilante Groups in the state, adding: “Security is everyman’s business.
“Let’s not leave it to the government alone or rely on CAN.
“We should trust God for a lasting solution.”