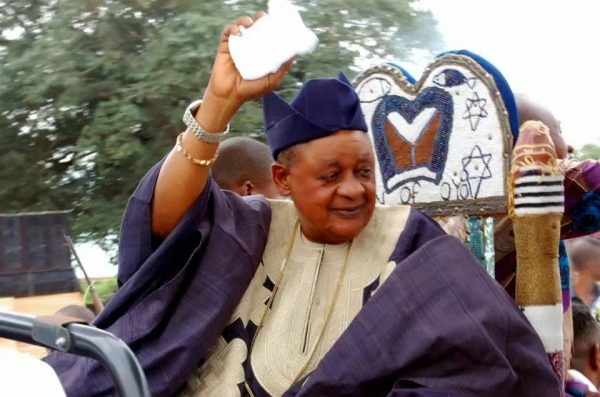 The International Criminal Court in The Hague has begun investigation into the alleged criminal activities filed against the Alaafin of Oyo, Oba Lamidi Adeyemi, by some concerned indigenes of Oyo town in Oyo State.
This was sequel to a petition filed by Jacob Oluokun and Suleiman Ishola on behalf of some concerned indigenes of Oyo town before the ICC, asking it to investigate all the alleged human rights violations of the monarch.
The Court, in a response to the petition on Tuesday, through a letter with reference number OTP-CR-317/15, a copy of which was made available to newsmen in Ibadan, the Oyo State capital, on Wednesday, confirmed the receipt of the petition.
The ICC letter, which was signed by M.P. Dillon, Head of the Information and Evidence Unit, Office of the Prosecutor, stated: “On behalf of the Prosecutor, I thank you for your communication received on 09/09/2015, as well as any subsequent related information.
“The Office is analyzing the situation identified in your communication, with the assistance of other related communications and other available information.
“Under Article 53 of the Rome Statute, the Prosecutor must consider whether there is a reasonable basis to believe that crimes within the jurisdiction of the Court have been committed, the gravity of the crimes, whether national systems are investigating and prosecuting the relevant crimes, and the interests of justice.
“Analysis will be carried out as expeditiously as possible, but please be aware that meaningful analysis of these factors can take some time.
“As soon as a decision is taken on whether there is a reasonable basis to proceed with an investigation, we will advice you promptly and we will provide reasons for the decision.
“We thank you for your interest in the ICC. If you would like to learn more about the ICC, please consult our website at www.icc-cpi.int.
“If you would like to learn more about how the Office carries out analysis of information, please see our policy paper and the annex to that paper, on the Office webpage at the website above.”
The petition, entitled: “Unprecedented criminality, flagrant human rights violations, bomb planting, gun running and unresolved assassinations in Oyo town, Oyo State,” was sent to ICC on September 9, 2015.
The petitioners claimed: “We write as concerned indigenes and residents of the ancient Oyo town, Oyo State, who are disturbed by the wanton murder of innocent citizens and the traumatisation of the indigenes by the Alaafin of Oyo, Oba Lamidi Adeyemi 111,
through his goons, the acts of which have remained unchecked and un-investigated by the Nigerian State in spite of all known legal processes to cause the State to do so.
“So if Oba Adeyemi 111 is too big for Nigeria State to be investigated and brought to book, the ICC is our last hope to stymie the criminal tendencies of his and restore the hope that nobody is above the law.”
A Federal High Court sitting in Ibadan had on December 15, 2014 issued an order of mandamus compelling the Inspector General of Police to investigate Oba Adeyemi for alleged criminalities, including murder, bomb planting, unlawful possession of arms and so on.
The application for mandamus with the suit No: FHC/IB/CS/54/2014 was filed at the Federal High Court, Ibadan by the applicants’ counsel, Biodun Abdur-Raheem, on July 16, 2014, two months after the police declined actions on the petition.
The petitioners noted with concern that 13 months after the court gave its order, the Nigerian Police are yet to comply, thus raising suspicion that Oba Adeyemi is being helped to escape investigation.
It will be recalled that the petitioners on Friday equally petitioned President Muhammadu Buhari asking him to compel the Police authorities to execute a court judgment ordering the investigation of Alaafin of Oyo, Oba Lamidi Adeyemi.
Oluokun and Ishola are from Isale-Oyo community with which the Alaafin has been at loggerheads since 1992, when the head of the community, Amuda Olohunosebi, the then Ashipa of Oyoland, was murdered.
“But because we believe the new government of Buhari will not be party to injustice, we petitioned the Presidency,” counsel to the petitioners, Abdur- Raheem, said.