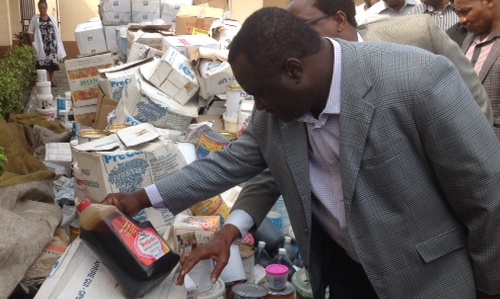 The real reasons the National Agency for Food and Drugs Administration and Control on Tuesday night sealed completely the business outlet of a popular elite and confectionary company, Chocolat Royal, has emerged.
Apart from the importation, storage and use of fake, unregistered and expired/unwholesome food products to produce consumables for customers, we can authoritatively report that Chocolat Royal was sealed by NAFDAC on the discovery of six illegal 40ft cold rooms fully stocked with contaminated food products built on top of sewages (soak away pits) and in front of toilets.
Not only that majority of these food products discovered have expired since 2004, which is 11 years ago, with the most recent expiring in 2013, the most worrisome aspect of it all was the discovery to the consternation of NAFDAC officials that the management of Chocolat Royal had revalidated the expiring dates of almost all the food products, with 90 per cent of them were not even written in English language and therefore not registered.
While two of the illegal cold rooms built in front of toilets were discovered at the Chocolat Royal headquarters at 267A, Etim Iyang Crescent, another two were discovered and also sealed at 1, Karimu Kotun Street, the residence of the company’s Chairman, Amin Moussalli, both located in Victoria Island, Lagos.
Investigations revealed that Moussalli, the Chairman of AIM Consultants, with chains of media houses including Cool FM, Nigeria Info, Wazobia FM stations,as well as WEE television stations, who is now at large, travels abroad to source for companies whose food products have few months to expire.
NAFDAC officials said the Lebanese business mogul receives these products mostly for free or at a reduced price and also gets paid by the companies to evacuate the products, which ordinarily would have cost them colossal amount of money to dispose.
He then ships them in large quantities to Nigeria, which has alleged by NAFDAC has become his dumping ground for food toxic for close to two decades.
These products are then cleared at the wharf and offloaded inside the two cold rooms at his Karimu Kotun residence, Victoria Island, from where they are then transferred to Chocolat Royal headquarters and then used to prepare ice creams, chocolates, beverages and pastries for members of the public.
At the end of the double operations, which lasted for nine hours, imported fake, unregistered and expired food products worth over N1 billion stocked in these illegal cold rooms were evacuated in six Hilux vans and buses, which NAFDAC stormed the place with.
This remarkable feat by NAFDAC was as a result of a tip off from a journalist who for three years has investigated the activities of Chocolat Royal, a company reputable for playing host to top Nigerian and foreign echelons, including governors, legislators, managing directors, artistes and others for close to two decades.

When the officials of NAFDAC stormed Chocolat Royal at exactly 12:15pm on Tuesday with some team of mobile police officers, they were resisted vehemently from carrying out their duties by some senior staff of the confectionary company, allegedly led by the Director of Finance, Idowu Adebayo, and others who apparently were in the know of the plot by the company’s management.
Understanding the gravity of what was about to happen if eventually discovered, they denied NAFDAC officials access to the cold rooms and stores to forestall more discoveries after some large quantities of the expired food products were discovered in their freezers, kitchens and bars upstairs, requesting for search warrant from the officials, a ploy later discovered to be a strategy to enable them evacuate the cold rooms and stores.
The atmosphere was charged to the extent that the company’s bouncers were almost engaging the NAFDAC officials in a brawl, forcing the mobile police officers to apply force and made some arrests, which eventually made most of them to retreat.
But access to the cold rooms and stores was not granted.
However, a little drama ensued when the obstinate management of the eatery invited other mobile police officers, who were probably their accomplice, to the scene to scare NAFDAC officials who they felt were acting illegally out of their premises, but the Superintendent of Police who led the NAFDAC police team ordered them out.
On realizing that the operation was not illegal after they had put several calls across to some top shots in the society, the daughter of the Chairman, who also is the Deputy Group MD of AIM group, Tatiana Moussali Nouri, was left with no choice than to cooperate.
Nouri asked the staff to also cooperate, while she led the officials round the premises, opening stores and cold rooms, which they were able to evacuate as the melee was on, but the NAFDAC officials could not be deceived based on the information already in their possession.
In order to re-strategize, the NAFDAC officials took inventories of the expired products discovered inside the freezers, kitchen and some bars upstairs and urged the management to sign the papers, while every cold room in sight was sealed to prevent the management access for more evacuation.
Pretending to have concluded inspection, they asked the Chocolat Royal management to report to the NAFDAC office the next day and then stormed Moussalli’s Karimu Kotun residence where the first two 40ft secret illegal cold rooms filled with fake, unregistered and expired food products built on top of sewage were discovered.
On getting to the apartment, however, the foreign national security guards and other domestic staff unleashed dogs on the NAFDAC officials and refused to open the main gate leading to the building against all entreaties.
This however forced NAFDAC officials to put a call across to the Director of Investigation and Enforcement of the Agency, Kingsley Ejiofor, who immediately stormed the scene.