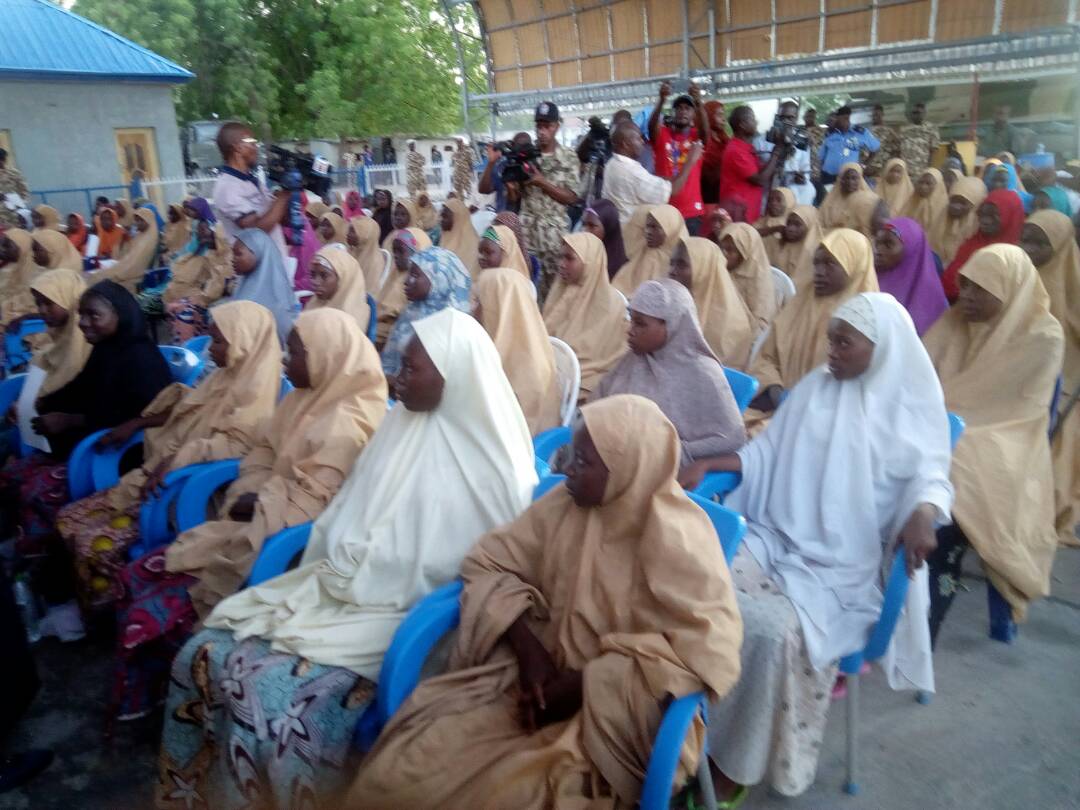 One of the freed Dapchi schoolgirls, Khadija Grema, has said five of her colleagues died of heart attack caused by stress while in custody of Boko Haram.
She also narrated how they were picked from Government Girls Technical College, Dapchi in Yobe State on February 19 by the jihadists.
Grema said the insurgents did not maltreat them, but five students died of heart attack and stress caused by the trauma of the abduction.
She said: “That fateful day, we were ready for dinner, when we heard shootings, then one of our teachers was calling and directing us to go out through the gate.
“We ran into the insurgents at the gate; they gathered all of us in the name of rescue when suddenly they asked one Babangida, the driver, to bring the truck which they packed us in.
“As we continued to move into the bush, they asked for those who were fasting among us. They then served us drinks, meat and food, after which we said our prayers and continued the journey.
“We crossed several rivers and streams and parked into one house where we lived. Honestly, we were not ill-treated. They didn’t torture us as they treated us well throughout our stay in captivity.”
Grema explained that they spoke Kanuri and Arab and also dispelled rumour that there were whites among those in captivity.
She said: “Five of our colleagues died of heart attack, trauma and stress as a result of the long trip. They didn’t allow us get close to them neither did they subject us to any molestation or any kind of sexual harassment.”
She explained that one of the girls was held back on the religious ground.
She said: “She is a Christian and she refused to denounce her religion.”
The girls were handed over to the Federal Government Delegation at the Nigerian Air Force Base in Maiduguri, Borno State on Wednesday night where they were flown to Abuja.
The Theatre Commander of Operation Lafiya Dole, which is battling the Boko Haram insurgency, Major General Rogers Nicholas, handed over the girls to a four-member Federal Government’s delegation on Wednesday evening.
The delegation comprised of the Minister of Information and Culture, Lai Mohammed; Minister of Interior, General Abdulrahman Danbazzau; Minister of State for Foreign Affairs, Khadija Bukar Abba Ibrahim; and a member of the House of Representatives, Goni Lawan Bukar, who is from Dapchi.
Mohammed confirmed the release of the schoolgirls unconditionally and no ransom paid.
“It is not true that we paid ransom for the release of the Dapchi girls, neither was there a prisoner swap to secure their release,” Mohammed said, adding: “What happened was that the abduction itself was a breach of the ceasefire talks between the insurgents and the government, hence it became a moral burden on the abductors. Any report that we paid ransom or engaged in prisoner swap is false.”
. ChannelsTV.