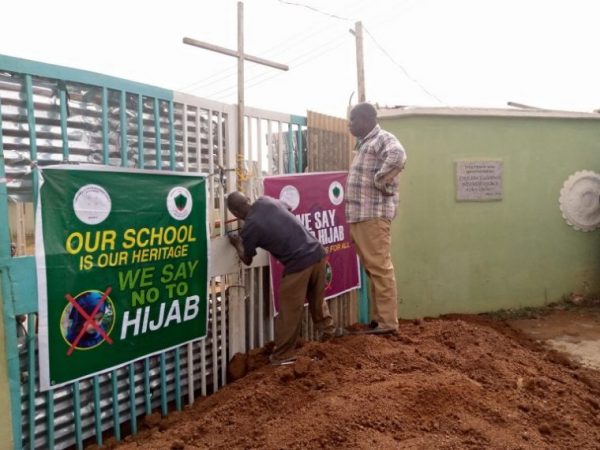 The Kwara State Government on Friday broke open the gates of grant-aided mission schools that refused to comply with its reopening order, following controversy over Hijab usage.

The News Agency of Nigeria reports that a welder was seen cutting the chains and locks of the gates of the noncompliant schools in Ilorin.

The action was done with the presence of armed security men and officials of the state Teaching Service Commission.

The cutting at St. Anthony’s secondary school gate met little resistance from church members, but at C & S College, the church members came out in their numbers singing and praying.

NAN reports that 10 schools were earlier closed down by the government on February 19 over the use of Hijab female students in public schools across the state.

The state government had directed resumption on March 8, allowing the use of Hijab by willing female students after meeting with stakeholders, but rescinded the decision for safety reasons.

In furtherance, the government announced reopening of the schools on March 17, but was met with resistance by some Christian faithful.

This led to violence in some of the schools on Wednesday, which took the intervention of security personnel to control.

However, two days after government’s pronouncement on resumption, the schools remained locked with the exception of ECWA Secondary School, Oja Iya,

This made the state TESCOM to direct all principals, teachers and staff to resume on Friday or face sanctions.

However, when NAN visited St. Anthony’s Secondary School, Bishop Smith Memorial College and C & S College on Friday morning, they remained shut with the principals, teachers and staff loitering outside the premises.

“When I got here this morning, the gate is firmly locked but the staff are all around according to directive from the government,” the Vice Principal said.

A teacher at St. Anthony’s Secondary School, Yunus Abdulrazaq, said he also came to obey the directive from the state government.

However, at Baptist Secondary School, Surulere, where violence started on Wednesday, academic activities had resumed with teachers in class but with few students.