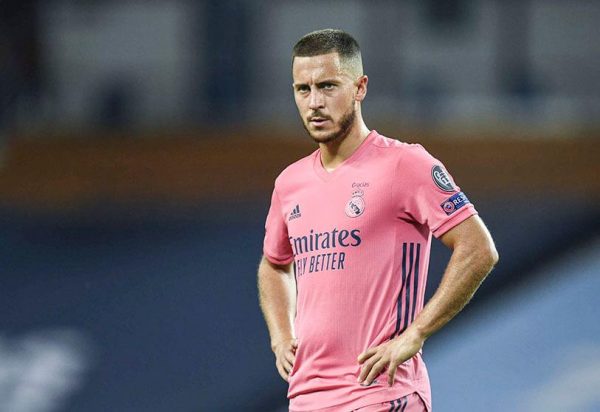 Eden Hazard has apologised to Real Madrid supporters for being seen laughing with Chelsea players immediately after his side’s UEFA Champions League semi-final exit on Wednesday.

The Belgium international, who spent seven seasons at Stamford Bridge before joining Real Madrid in 2019, was heavily criticised for sharing a joke with some of his former colleagues.

It came after another ineffective performance from Hazard, who has struggled with injuries in his two seasons at the Santiago Bernabeu and has been linked with a move away.

He played 89 minutes of the 2-0 loss in west London as goals from Timo Werner and Mason Mount sent perennial European champions Real Madrid crashing out 3-1 on aggregate.

A number of former Real Madrid players have taken aim at Hazard for his actions at full-time.

Fernando Morientes called for the 30-year-old to say “sorry” to the club’s fanbase.

And Hazard took to social media on Thursday to do exactly that in a short statement.

He wrote: “I am sorry. I have read lots of opinions about me today and it was not my intention to offend the Real Madrid fans.

“It has always been my dream to play for Real Madrid and I came here to win. The season is not over and together we must battle for La Liga! Hala Madrid!”

The forward has featured only 40 times for the Spanish giants in all competitions since arriving in a big-money deal, including 18 appearances in the 2020/2021 campaign.

He may get an opportunity to redeem himself when title-chasing Real Madrid host Sevilla in La Liga on their return to action on Sunday.